The anticipation for a Mortal Kombat X Kombat Pack 2 reveal is very high at the moment. Now NetherRealm could be planning to announce it over the weekend as Ed Boon has teased something which will be happening on Sunday.

On Ed Boon’s official Twitter account, he has told the Mortal Kombat X universe that seismic activity has predicted some kind of announcement in a few days.

The picture shown features the last Kombat Pack 1 character Tremor, but as far as we’re aware this reveal isn’t Tremor gameplay as NetherRealm has already saved that for a separate video stream on Tuesday July 21. 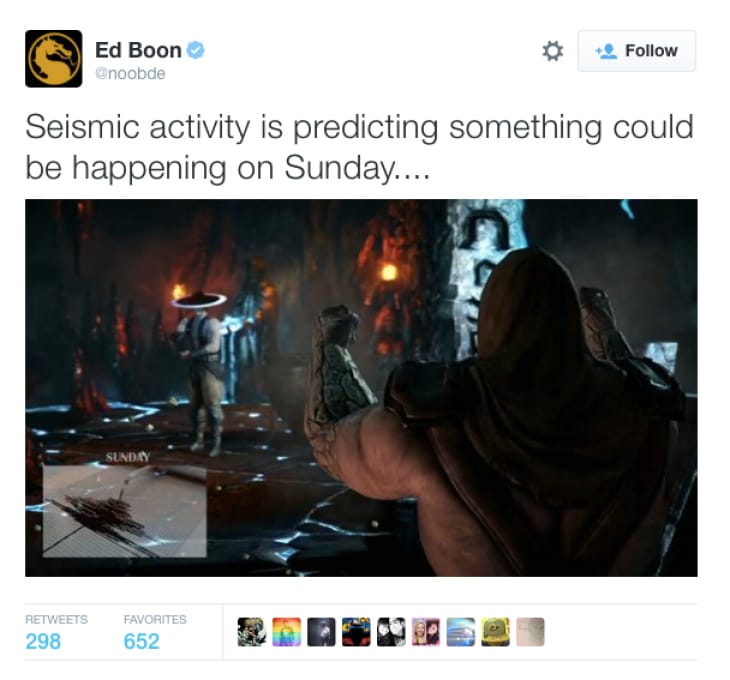 As you can imagine, fans have already begun to speculate that this announcement could be related to the MKX Kombat Pack 2 release date.

NetherRealm won’t be short of ideas either. Rain, Smoke, Sindel, Baraka, Fujin, Sareena, Cyrax and Sektor are all high on the request list for playable characters, so we’ll have to see what happens.

A second Kombat Pack for Mortal Kombat X would make perfect sense too, since many players bought the Season Pass and are wondering how the game will be supported in the future once the last piece of content is out.

Warner Bros will also want to make as much money as possible obviously, so we would say a Kombat Pack 2 is a safe bet.

Is it being announced this Sunday though? Let us know your thoughts on this and for fun – pick four characters including one non-guest MK character which you would choose for the MKX KP2.