It’s always hard to review an action camera when you do not have one that is equivalent, although we can still give you a general idea of its looks, features and performance. The model in question is the Kitvision Escape HD5 action video camera, which was recently sent to us so that we can offer our own hands-on review, and to form our own opinion.

Before we get going, we have done a comparison video, although we know that it is not truly fair in the sense that the Kitvision Escape HD5 was pitted against the GoPro Hero3+ Silver. The reason for this is because this is the only action camera we have to hand, and so therefore to try and make it a little fairer both were recording in 720p – more details of which we will talk about a little later. 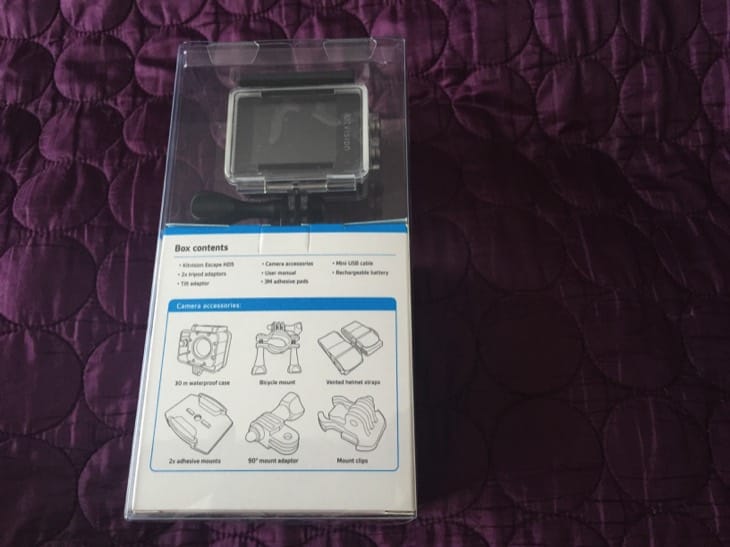 The packaging for this budget action camera is very impressive, as it’s very much the same as you would get for one that has a much higher price tag, and so you get the sense you have a high quality gadget waiting to be opened. It’s nice to see the camera looking at you, and it does look pretty decent, and gives you the urge the take it out. However, just be careful because the camera is contained inside its waterproof casing, and you can easily rip the box containing the accessories in if you are not careful.

Speaking of accessories, it’s a 17-peice kit in all, which includes:

You will notice on that list the array of mounts and adapters, and so there really is something for mosts things that you would use an action camera for. The straps included are made from nylon webbing, and so very strong and reliable, which means you can rest assured that they will stay in place in most situations. 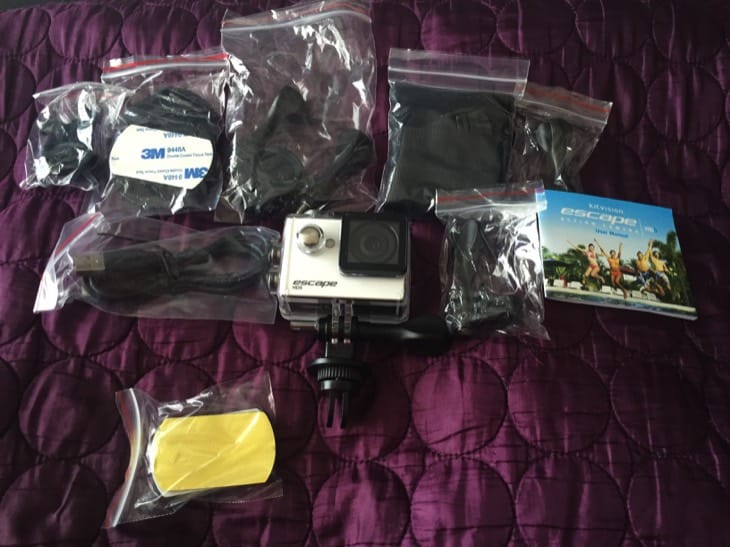 It’s worth noting that the Kitvision Escape HD5 Action Camera looks very much like a GoPro, and while some of you may see this as a bad thing, this is not the only budget brand to do so, and therefore we have to remember this slight issue. The device itself is not too bad in terms of its build quality, although we did not want to go over the top when testing it out because of fears it would not handle the likes of going skateboarding, for fear of the camera breaking. The guy that appears in our very own video review did want to show of his skateboarding skills, but we told him to stick with drumming instead. 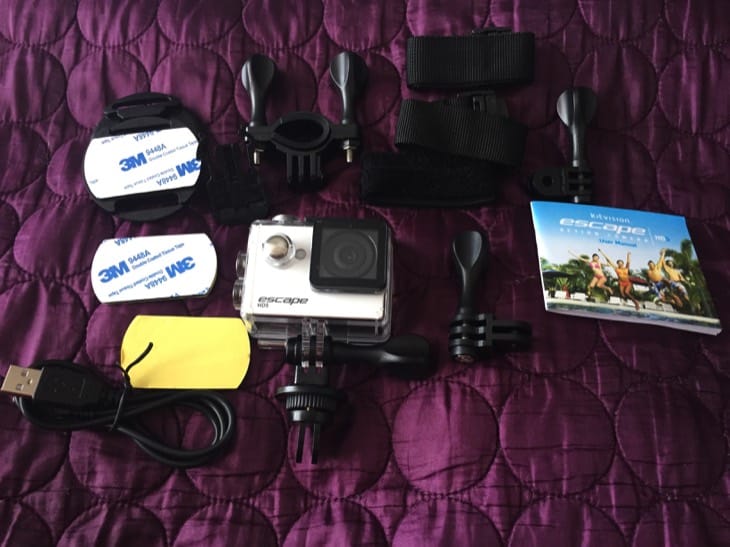 Upon starting the video review it was noted that it only records in AVI, and so if you prefer to upload your videos in another format you will need to use a third-party program to convert that format. Oh, one other thing you will notice when viewing the video, we forgot to edit the time and date, and so shows the wrong timestamp – just a small oversight on our part. 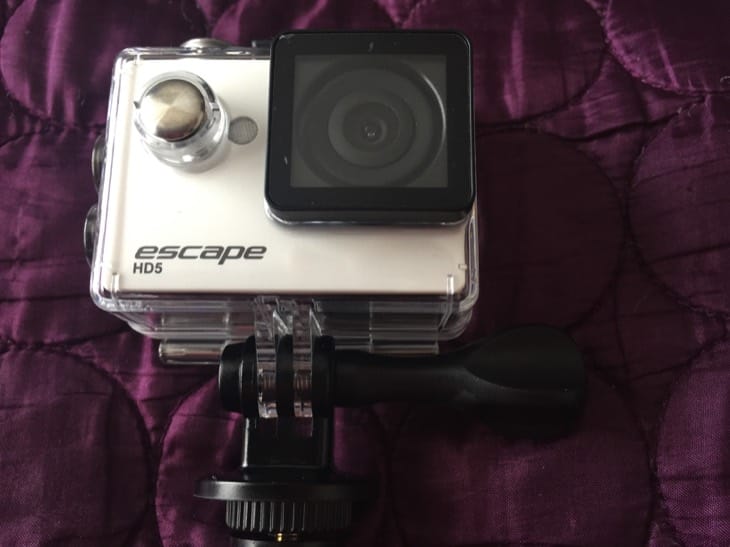 Like we said, the only other action camera we had was the GoPro Hero 3+ Silver, although we did take it down to 720p, just to give us a better idea of how the two compare. We know this model can go higher, but the Escape HD5 can only damage 720p at 30fps, and images can be shot at 5-megapixel. We did have a few attempts taking some still shots, but they were not that great, and so this is far better to use for its more intended purpose, and that is as an action-cam. 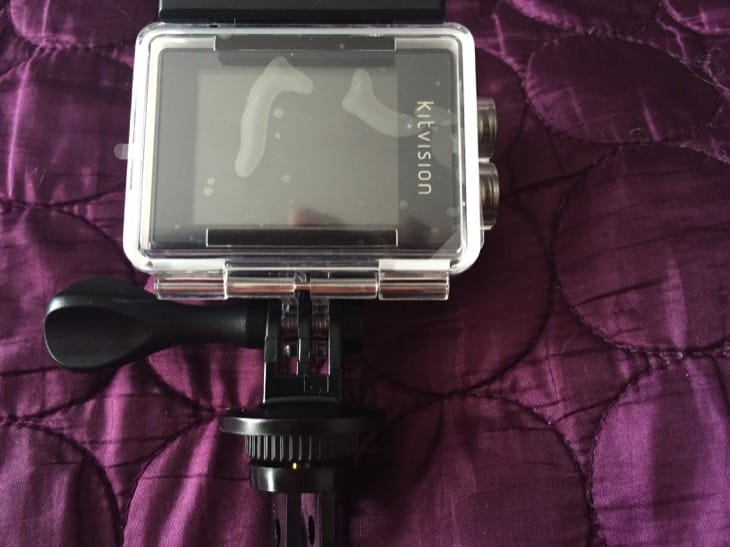 Before we set up we did a couple of test runs and did notice that this model of camera is not ideal in a low-light environment, and you will also notice how its mic is unable to pick up too much depth. However, we have to say based on the Kitvision Escape HD5 price of £50, it performed far better than what we assumed – and so we should never judge a book by its cover. 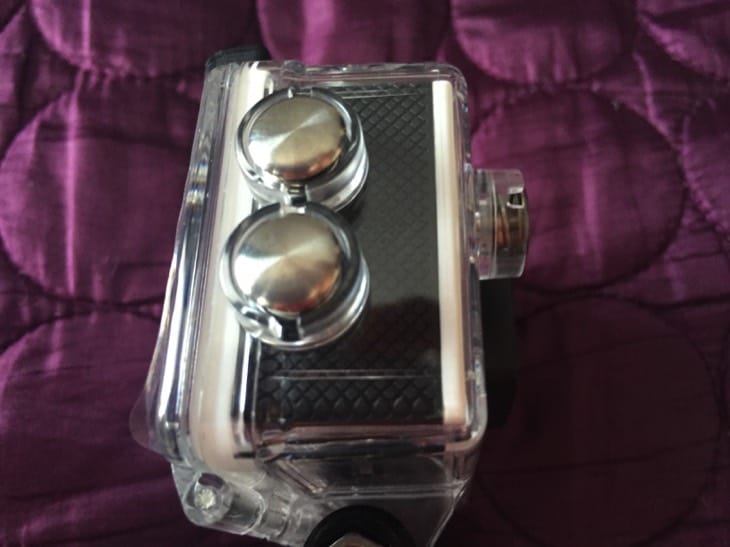 The video was taken at different viewing angles, and also with and without the waterproof case to give you an idea of how different its recorded image and sound is. We did notice upon playback that it did jump a bit because of the kick drum, although once uploaded the software used did manage to rectify this. 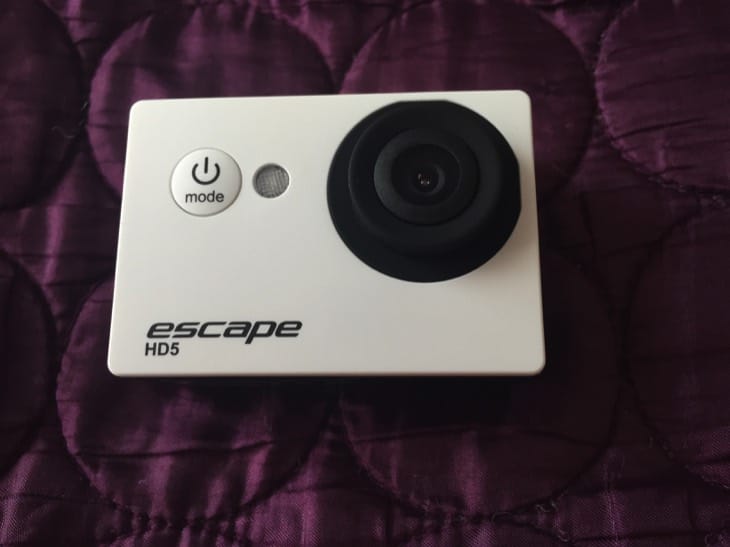 During the test period we did try to view the videos at first through the built-in display, but it’s not of a great quality, and so can be awkward because of its low resolution. There is also no sound playback, and so not ideal when you want to see how well such a recording is going, and so meant having to keep watching the footage through the MacBook Pro, which also has all the editing tools on for making such recordings. You can watch the video recording below, and also head direct to the UK DrummerDan YouTube channel. 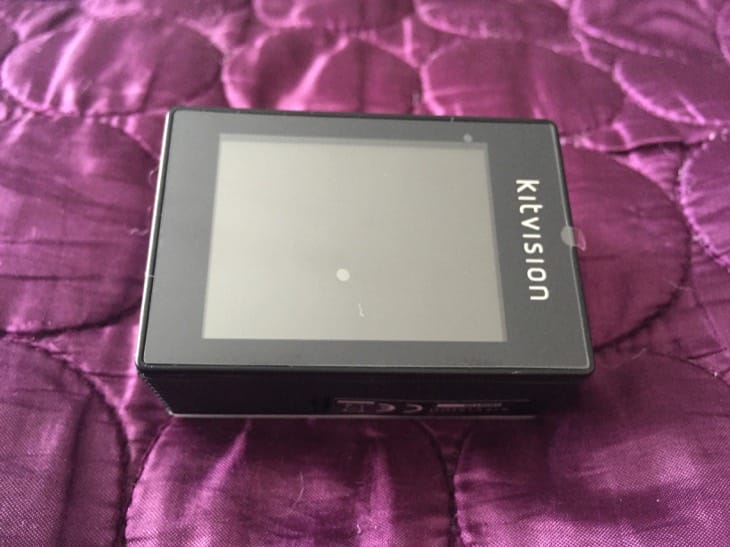 So what did we learn when using the Kitvision Escape HD5? It’s good enough to have some fun with, but do not expect professional results – although Kitvision does not presume this model to be something it is not. What we would say is that if you have a young child that likes to take action shots with their friends, then this is the ideal first action camera for them. Its battery is good enough for 90 minutes, and does not take too long to charge when fully flat. 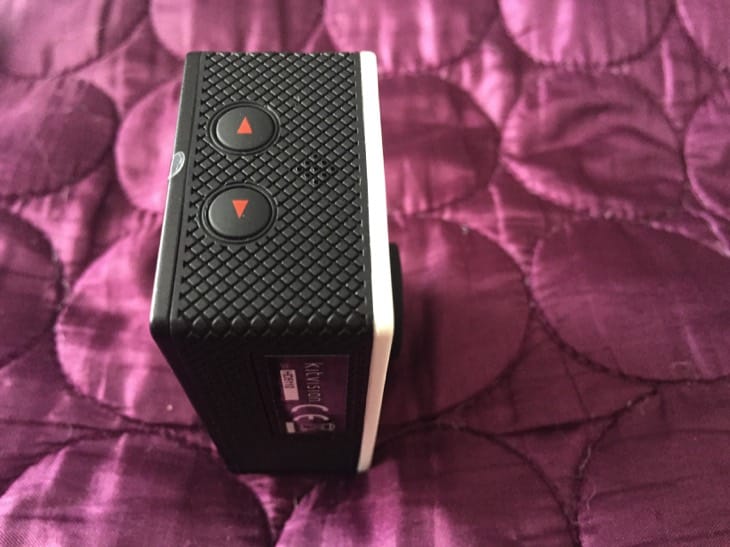 Overall impression – It really is a decent piece of kit for the money (which is £50 direct from Kitvision) when you consider the amount of accessories you get, and the ability to record in 720p. This is a good investment to see if you really need an action camera, and when you finally feel you do, then you could always give this away to your child and opt for the Kitvision ESCAPE 4KW (WIFI), which records in 720p, 1080p, and 4k, and goes up to 60fps and has a 12 MP photo resolution. The good thing about this is that it will only cost you £150, so still a lot cheaper than what you would pay for a GoPro with these features.