The last time we spoke about Kingdom Hearts 3, we told you that the game would either be shown at E3 or later on at D23 in November. Now though, new rumors have emerged suggesting that Square-Enix may be thinking about the possibility of having a Kingdom Hearts 3 release date on PS3.

This is due to the fact that this week, the official Kingdom Hearts Facebook page has sent out a message, asking fans to complete a survey.

This survey includes questions about Kingdom Hearts 3, including a specific question on whether fans would want to see Kingdom Hearts games on other platforms.

Some of the list of platforms include PS3 and Xbox 360, leading some to speculate on why Square-Enix could be asking such a question in a sudden survey. 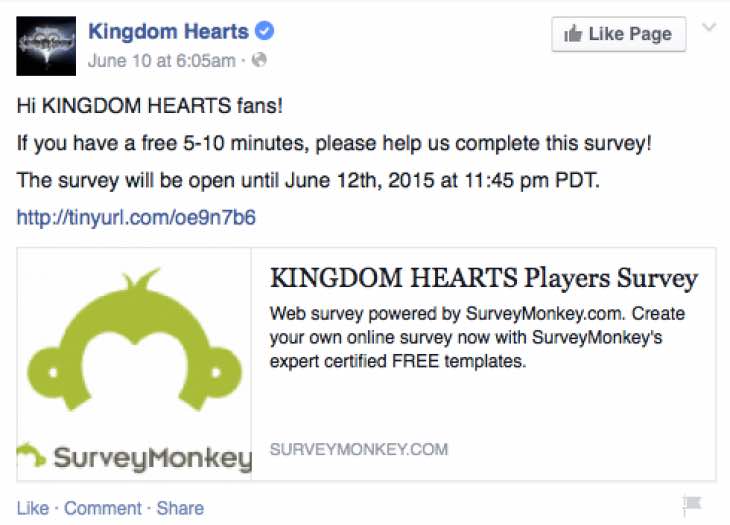 We’ve just had Activision announce that there will still be a PS3 and Xbox 360 version of Black Ops 3. Ubisoft meanwhile has said that they don’t intend to bring their big games to previous-gen hardware anymore, so is it a case of Square-Enix being stuck into two minds on whether to deliver a Kingdom Hearts 3 PS3 and Xbox 360 port?

It’s a difficult decision for sure and one that could go either way. Square-Enix obviously gets to make more money with a last-gen version, but then at the same time they may risk the wrath of fans who want them to solely focus on a next-gen console version.

Hopefully E3 2015 has the answers to this, as there still seems to be a great belief that Square-Enix will show Kingdom Hearts 3 at the event rather than have fans wait until the D23 expo in November.

Give us your thoughts on this as a die hard Kingdom Hearts fan. Do you want to see a version for PS3 and Xbox 360, or would you just prefer Square-Enix to go full steam ahead with next-gen and ignore those who don’t want to upgrade their hardware?