The Microsoft E3 2011 press conference recently kicked off and 15 minutes in we already have too much news to tell you about, in this brief post we will tell you a little about Mass Effect 3 and Ghost Recon: Future Soldier, both of which were showcased a little while ago boasting Kinect support.

As you can probably appreciate we do not have enough time to go into full detail, however we can confirm that Mass Effect 3 and Ghost Recon: Future Soldier will both support KInect controls, not only this but both upcoming games will recognize voice controls, neat eh?

The most exciting things we go to see came from GRFS, at the beginning of the demo you got to see “Gunsmith”, this allows you to literally build your gun using Kinect. We have embedded an image below (from Engadget’s live blog) which shows you that you can choose different colors, optics, magazines, underbarrel attachments, gas systems, barrels and side rails to suit your needs. This level of customization is in our opinion unrivalled, also if you want a bit of fun simply say “Randomize” and a random configuration will be produced. 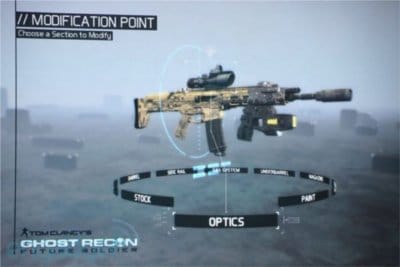 Other highlights from the GRFS demo included the fact that saying “optimize for range” makes your gun reconfigure itself to suit your surroundings, also the game allows you to use Kinect to aim your gun, it’s hard to say how accurate the aiming was, however we suspect that we might be seeing a little more later on. If all this excites you we can confirm that future Tom Clancy games will also feature Kinect support.

The Mass Effect 3 demo didn’t show us too much in terms of Kinect controls or voice commands, however it did show how you can speak lines of dialog instead of using the controller to select them, also we got to see the game’s upgraded engine which allows for great lighting. Again Microsoft promised to show us more later on.

When we hear more about both titles we will keep you posted, do you like the sound of Kinect support and voice recognition for these games?