Earlier on this month we took a look at how the popular Nook HD+ compared against the even more popular Amazon Kindle Fire HD. Now though, we wanted to show you how Amazon’s upgraded model fairs against Barnes and Noble’s tablet, with a brief Kindle Fire HDX 8.9 Vs Nook HD+ review for you to watch.

It’s clear that Amazon has really hit their stride at the moment. After launching the Kindle which originally only offered e-book capabilities, we’ve now reached a stage where Amazon’s Kindle Fire HDX tablets can offer serious competition to the likes of the iPad Air, Samsung Galaxy Note 10.1 2014 and soon to be released Nexus 10 2013 model.

The Amazon Kindle Fire HDX is also a consumer favorite as it’s selling for an incredible price. A price tag of $349 is over $100 cheaper than the 16GB iPad Air, although it doesn’t come close to matching the unbelievably cheap Nook HD+ which is just over $160 at various retailers. 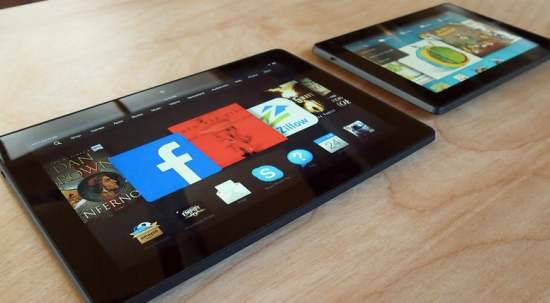 Then again the Nook HD+ still has access to the Google Play Store to download any apps that the Kindle Fire HDX can. So for the average consumer, this is still fantastic for a tablet that only costs around $160 compared to the $349 Kindle Fire HDX 8.9.

We’ve incldued a brief video review below, giving you a further analysis of both devices if you need it. If you have picked up either of these tablets over the busy shopping period, let us know how you are getting on so far.