Killzone fans must be getting really excited at the moment, what with the much-anticipated Killzone 3’s February 2011 release date coming up. There appears to be a lot of hype surrounding the upcoming game, and the special Helghast Edition in particular.

Besides having the option of just buying the game itself or the Helghast Edition, European gamers also have the choice of a special Collector’s Edition (see previous article here). As Brian Warmoth at multiplayerblog.mtv.com previously noted, the Helghast Edition is priced at $129.99.

However, Brian also noted that for a brief moment he thought that the replica Helghast helmet that’s included in the Helghast Edition of the Killzone 3 game would be an actual helmet. What you really get is a miniture replica helmet, along with other goodies including an art book and a voucher. 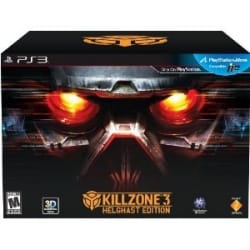 According to Shui Ta over at examiner.com, Amazon has just released several packshot images for Killzone 3’s Helghast Edition, which is due to launch on the same day as the game does. The images not only show off the cover art, they also show off the contents inside.

As a recent report on the computerandvideogames.com states, the developer Guerrilla Games has promised fans that Killzone 3 will play a lot more fluidly than the second installment. Have you pre-ordered the Helghast Edition of the Killzone 3 game?