Kickstarter has hit the huge donation landmark of $1 billion, this massively impressive figure has been reached after over 5.7 million people pledged their own cash to help fund thousands of creative projects across the world.

Kickstarter has created an infographic full of interesting stats to celebrate the achievement, their own little way of saying “thanks a billion.” So far 5,708,578 people across all 7 continents have pledged money to Kickstarter projects, originating from 224 different countries and territories.

Over half of the $1 billion raised has been done so in the past 12 months, Kickstarter first started back on April 28th 2009. The highest donating country by far as you can probably guess is the US, pumping over $663 million into Kickstarter projects. Next highest is the UK who have pledged over $54 million, Canada, Australia and Germany make up the top 5 countries to have supported creators. 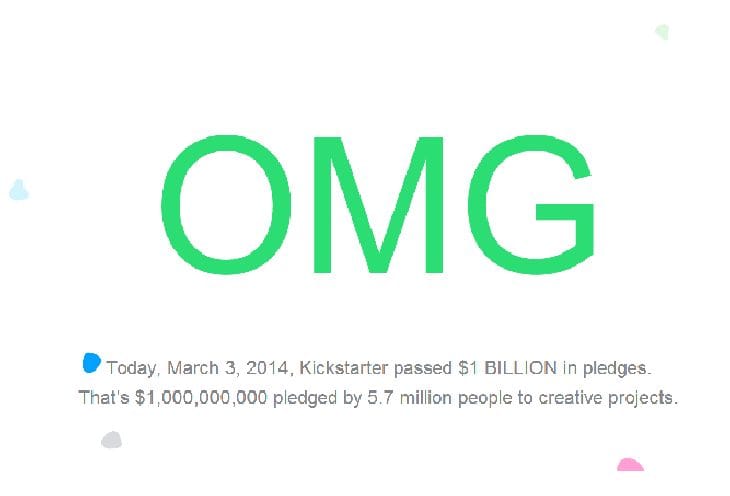 Interestingly 1,689,979 people have backed more than one project and 15,932 people have backed more than 50 projects. March 13th 2013 was Kickstarter’s busiest day with 54,187 supporters pledging $4,029,585.45 to 1,985 projects in one single day. We have featured a few great Kickstarter projects here on Product Reviews, such as the wireless phone charger ‘The Ark’ and all action headphones, know as ‘The Dash’.

Just for laughs, Kickstarter has also highlighted how much $1 billion really is by running a comparison of things you could buy with that money. That could get you 1.25 million iPhone 5S’s, 400 million rides on the New York Subway, 44,555 Robocop statues, a 50 year Lebron James contract, 1 Roman Colosseum or Instagram which is reportedly worth roughly a billion.

Are you impressed with what Kickstarter has raised and been doing to help creative people get their ideas and projects off the ground?