Every year car makers use a huge percentage of their advertising budget for the Super Bowl, and this year was no different, but not many of them bother with the World Cup because it is spread over a month rather than one day. However, Kia thought they would get in on the act and celebrate the World Cup 2014 with a couple of commercials, although they are flawed.

The first video is of the Kia Optima, where you see a bunch of guys playing American Football and all of a sudden the camera pans out to see an Optima being driven onto the field. Next we see a lovely pair of legs getting out of the car and the rest of the body follows.

Adriana Lima, the Victoria Secret Latin American supermodel then places a ball on the ground and then kicks it over to the American Football players, as a way to persuade them to play the sport that grabs the biggest audiences, especially during the world cup. 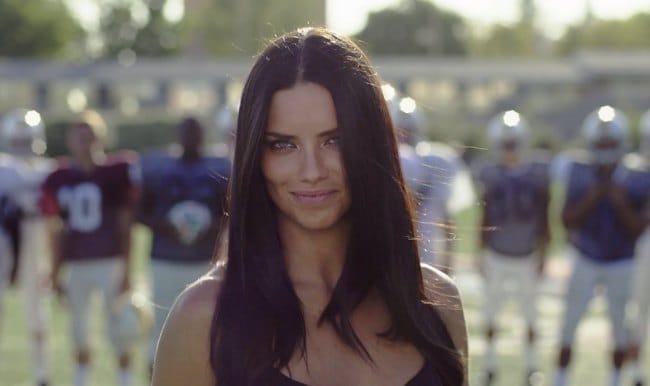 In the next video we see three guys sitting in a garage watching an American Football game, when all of a sudden the garage door opens and standing in front of the Kia Sorento is Lima, along with two other models.

They then walk into the garage and replace some memorabilia with football/soccer ones. The guys are gob smacked, but not as much as us, as what do you think the chances are of Adriana Lima driving a Kia, surely she would look much better in a Mercedes or something like that.

However, we have to admire how they have got Brazilian born Lima to promote Kia and also the 2014 FIFA World Cup Brazil.