As we told you minutes ago, Xur is live in the Reef and he is selling a few notable items this week. Specifically the Khepri’s Sting Exotic Hunter gauntlets which are brand new and arrived with the latest House of Wolves DLC expansion.

With this in mind, we wanted to give you a heads-up to one of the best Khepri’s Sting reviews in Destiny that we have found online.

It comes courtesy of YouTuber Arekkz Gaming, who you probably already know as a prominent member of the YouTube Destiny community who frequently uploads many useful videos for players. 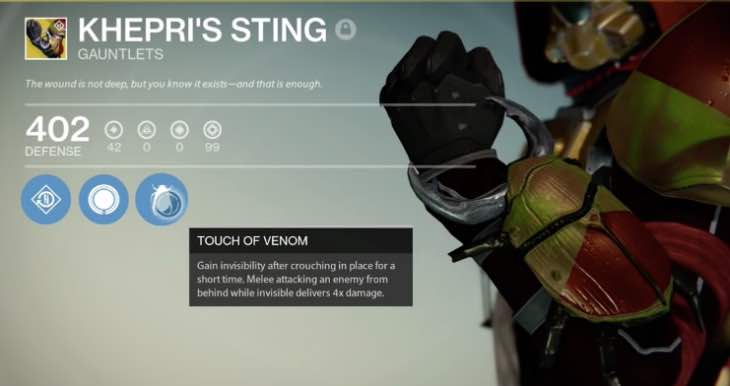 Now, he takes a look at these bad-ass looking new gauntlets, which come with the unique Touch of Venom perk. This ability grants the wearer invisibility after crouching in place for a short time.

The beauty of it though is that if you hit your opponent with a melee attack from behind whilst invisible with the Khepri’s Sting, you’ll get a 4x attack bonus which is extremely juicy.

Check out the video below for an in-depth look at this and see if it’s worth the 13 strange coins. It’s a no brainer in our opinion, buy it now and analyse later!

Did you buy the Khepri’s Sting today after seeing it from Xur? Harsh to all those that have been grinding away to get it as a rare drop.