As noted over on the webwire.com website, the updated JVC RV-NB70 Kaboom! has kept the same cylindrical-shaped design as the original, but has added a few new features to bring it up to modern day. This includes a microphone / guitar input with mixing capabilities.

The new RV-NB70 Kaboom! — which is available to purchase now for $299.95 — now boasts 40 watts of power and comes with a USB Host that enables playback of WMA / MP3 music that is stores on a USB mass storage device. It also features a CD player and an FM tuner. 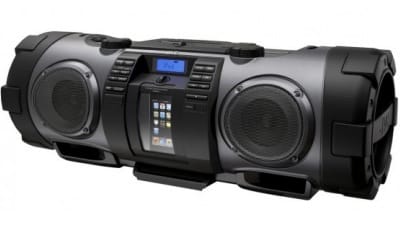 As mentioned above, the updated boombox now comes with an iPhone / iPod dock that’s set behind a sealing door for protection. An audio input also enables users to connect other devices up to the JVC RV-NB70 Kaboom! The device also comes with a remote control and a shoulder strap.

Would you buy the updated JVC RV-NB70 Kaboom! boombox?