JVC is to launch the Everio GS-TD1, a Full HD 3D recording camcorder, which we first learned about at the end of last year. This is the first of its kind and can record two Full HD images at the same time; this is done with the use of two lenses and sensors. Do not expect it to be cheap; the price that you will pay once released in March will be Rs. 91,000 ($1,999.95).

Tech Know Bits has now been able to digest the details of the new JVC camcorder since it was last seen at CES, so thought they would point out some of its key features. Some of the main specs include 5x optical zoom lens — not much but certainly more than enough for the average user. 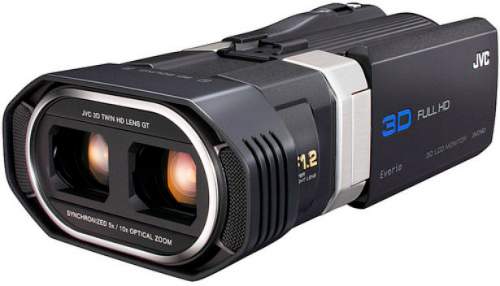 The biggest feature that we need to tell you about is the way that you do not need to use any 3D glasses while watching what you have shot. As this is a HD camcorder — 3D at that — the 64GB of storage is a must have. However, this can also bee expanded with the use of an SD/SDHC/SDXC card.

SlashGear said that it was too hard to tell just how good the JVC Everio GS-TD1 Camcorder was with the short amount of time they got to play with the device. However, the early signs are promising, but they need to be, as the likes of Sony and Panasonic will not be that far behind.

Is the 3D recording on this camcorder a gimmick, or is it a feature that you will use?