CES 2011 is not too far away, and with that being the case we have brought you a couple of things that are expected at the event. One of the items is a Samsung Slider Tablet PC, which will have a keyboard sliding out from it and we’re also hoping for a Microsoft Windows 8 release.

There is another interesting device that will make its way onto the scene and it is a 3D camcorder made by JVC. According to Engadget’s Chris Davies you can expect it to be using an LSI chip, the chip will allow you to record 2D and 3D images in full HD. 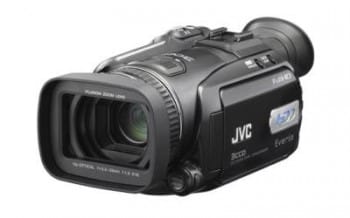 Some of the camcorders details were released in JVC’s press release, you can view it here. Within the press release they talk about the LSI chip and how it’s been developed for both still shots and HD recording on a single chip. They also mentioned that the still shots are 5.5 times faster at processing than their previous technology and the camera signal processing is quicker by 1.7 times enabling 60FPS 8.3 mega pixel video.

If you want to keep up with the CES event you can head over to their main website by clicking here, or you can download the official app from the iTunes store by clicking here. The event is looking like it will be bigger than ever with a host of companies and developers exhibiting their latest products.

With the advances in technology for TV’s and video games moving into the 3D spectrum, it seems like a natural progression for companies such as JVC to follow suit in their own field. We were wondering what the target audience would be for the device, but this was answered by JVC in terms of the LSI chip being suited to “a wide range of both consumer and professional products”. Whilst there are a few more details in the press release, JVC aren’t telling anyone the full specs but we do know it is planned to debut at CES 2011.

Are you excited by the prospect of video recording in 3D? Let us know your thoughts on their press conference in the comments below.