We can see that there is a lot of hate continuing on social media, all because Jordan Henderson is on the front cover of FIFA 16 in the UK.

What better way to silence some of those doubters though, by showing off some incredible skill. That is what Henderson has done in LFC’s first pre-season game with a Henderson Rabona pass that is now going viral on Twitter.

Luckily for you, we already can show you Jordan Henderson doing a rabona assist to Lallana as someone has captured a Vine of it minutes after being broadcast.

How about that ladies and gentlemen – did Steven Gerrard ever do that? Not only did Henderson pull that off, but Lallana scored from the pass which is rather impressive.

It won’t stop the Henderson doubters, but it is definitely amusing to see some of the reason in relation to FIFA 16 online. 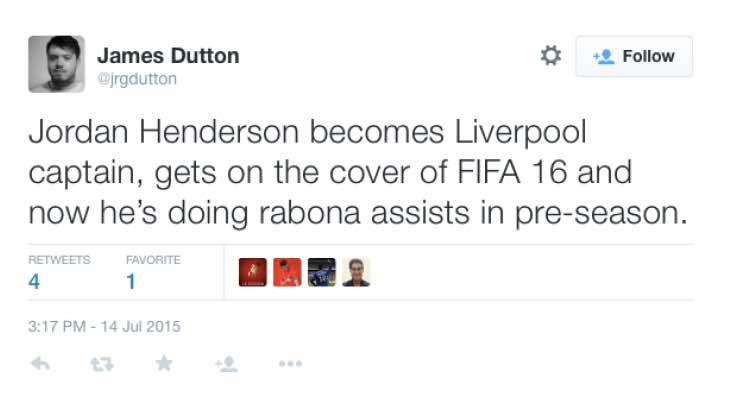 Enjoy the clip above and let us know your thoughts on it – did you know Henderson had that in his locker? What a way to silence the doubters and we are very interested to see if EA decides to take advantage of good PR by highlighting his rabona on the official EASportsFIFA account.