Earlier on in the week we spoke about the interesting decision that EA would make in terms of the FIFA 15 team of the week for Ultimate Team. Now, we can confirm that EA did indeed make their selection based on international performance and there’s one big surprise in store for the community.

You may not believe your eyes, but Sunderland FC player John O’Shea has made it into EA’s team of the week. In doing so, he beats Phil Jones to the punch who recently joked upon having a 95 overall card in Ultimate Team.

If you follow social websites such as Twitter, you’ll know that O’Shea is often the victim of some ‘banter’ among fans and we can already see that there has been some hilarious reaction online after EA’s decision. 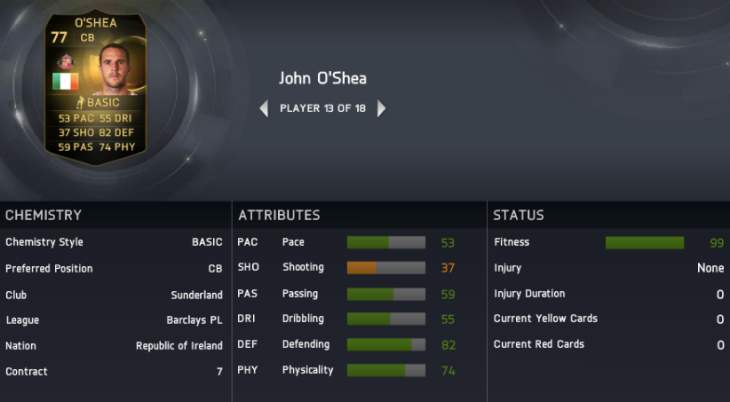 He is there in the lineup alongside David Silva and Hamsik on merit though, after having a great performance for Ireland in their recent Euro 2016 qualifier.

To have a chance of winning the new 77 rated John O’Shea card, you’ll have to either auction for the player on the transfer market, or try your luck at opening some gold packs.

We’ve included some of the new stats for the player above so you can have a closer look. Give us your reaction to the fact that John O’Shea is now an in-form player on FIFA 15.

That card alone means he’s now on par with defenders such as Jose Enrique for Liverpool, PSG’s Marquinho, Rafael and Chris Smalling.