Jimmy Kimmel has angered gamers this week by poking fun at the new service launched by Google, titled YouTube Gaming which will allow gamers to watch other gamers, playing games.

The comedian created a sketch on his TV show, aimed at creating a few laughs and succeeding in the process. At the same time though, many gamers took personal offence to it and have begun sending some rather disgusting messages to Kimmel on Twitter. 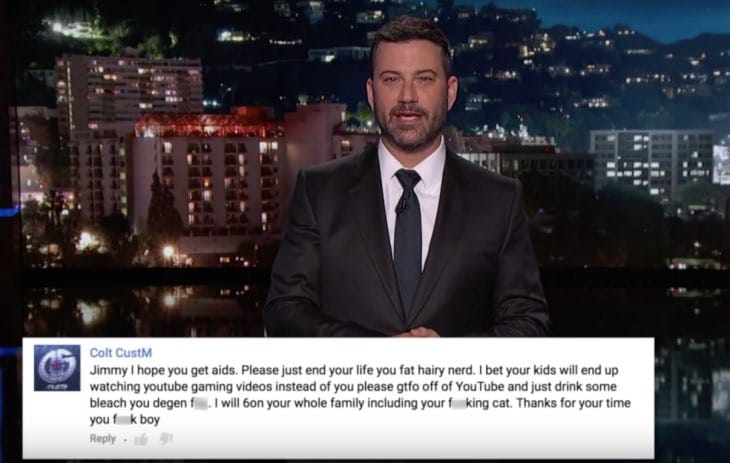 If Kimmel sent out some bait as a comedian, then thousands appear to have fallen for it hook line and sinker. We’ve included some examples of just how bad the video gaming culture can be when showing its ugly side – warning it isn’t pretty.

We’ve also added both videos from Jimmy Kimmel – the original one poking fun at YouTube Gaming and also a second video from Kimmel which aired just hours ago showing his reaction to some of the messages he had been receiving.

Is this yet another wake up call on how toxic social media can become when given ammunition? The fact that so many users have taken offence to a comedian doing his job is almost laughable.

Watch the videos below to bring you up to speed on the ongoing Jimmy Kimmel Vs YouTube Gaming saga and let us know your own thoughts on the debate – if you are mature enough of course.