We love it when we hear about retro games being re-released on today’s home consoles and this latest confirmation of Jet Set Radio HD definitely fits the retro category. Sega is bringing the Dreamcast classic to the PS3 and Xbox 360, but we hope that a similar version also finds its way on to Sony’s new PS Vita handheld as well.

To bring you up to speed, Jet Set Radio had been teased before this week and now Sega has just made things official. The game will be coming as a PSN and Xbox Live download during the Summer, with a PC version also apparently on the way as well.

Jet Set Radio is easily one of the best games on Sega’s ill fated Dreamcast console and we’re delighted to see Sega give this generation of gamers a chance to relive the 2000 classic. As mentioned above, this won’t just be a straight up port of the Dreamcast original – Sega will be upgrading the game with HD graphics and since the game was one of the first to utilize cel shaded graphics, it will probably still look as fresh as ever on the PS3 and Xbox 360.

While the news of Jet Set Radio’s return is obviously awesome, we’re a little bit disappointed that there doesn’t appear to be a PS Vita version in the pipeline. Jet Set Radio seems like a perfect fit on the Vita’s gorgeous OLED screen and it seems a strange decision from Sega not to cash in on the opportunity to bring it to the Vita, as it would simply fly off the shelves.

There may be one saving grace though for Vita owners, once Sony improve their remote play functionality via a firmware update. At the moment, remote play is basically non existent on the Vita and is actually quite frustrating for a lot of you who hoped that you would be able to play Killzone 3 at the very least after Sony’s heavy advertising at the Tokyo Game Show. 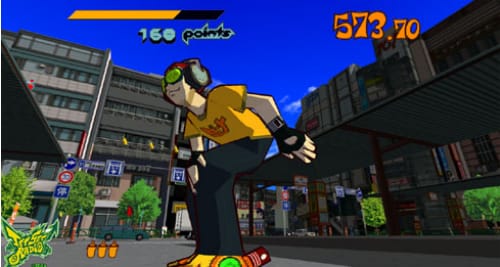 We’re confident though that remote play and other PS3-Vita cross platform features will work like a dream sooner rather than later though, so fingers crossed that this Jet Set Radio game will be just as good playing it via PS3 remote play on the Vita, rather than having a standalone title.

What is your reaction to Jet Set Radio HD coming out – would you like to see this on the Vita as well? Let’s get the word across to Sega.