Most American’s at some time or another have seen an episode or two of the game show Jeopardy, but I bet you have not seen many that featured a Human vs. Machine? Well this is just what IBM set up to show just how powerful and clever its DeepQA supercomputer was. The results did not go the way of the human, which viewers will be able to see in February 2011.

Yesterday was just a demonstration round, so viewers will hope to see the IBM computer beat “Jeopardy champions Ken Jennings and Brad Rutter”. According to eWeek the name of the project is called Watson and has been four years in the making. 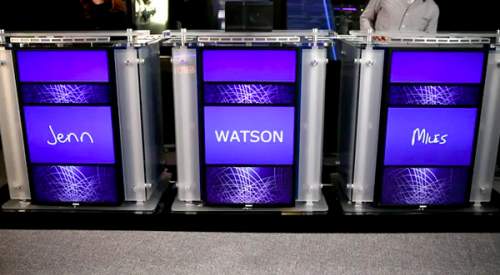 We can watch the episode of Jeopardy and see the fun side of it, but there are more serious aspects going on behind the scenes. Having a Supercomputer that is able to understand how we speak and all the slang that goes with it can become very useful in not only the healthcare field, but also business and tech support as well.

Jesse Nunes from Boston.com explains that the Watson Supercomputer consist of 10 racks of IBM servers and includes 15 terabytes of RAM. Do not think that the computer has it easy, as there is no connection to the Internet, so it has to rely on the encyclopedias and other documents stored in its hard drive. It is said that Watson has access to more than 200 million pages of content — more than your average collection then?