It is an exciting time for FIFA fans. EA has just announced Lionel Messi as the global cover star for the game and will soon be making other big decisions on the FIFA 15 UK cover stars and also FIFA 15 Ultimate Team player upgrades.

We have talked about certain players that are due for an upgrade, but one of the players that really stands out for us is James Rodriguez, the Colombian star who plays for Monaco and had an amazing World Cup in Brazil.

So good in fact that he ended up winning the Golden Boot for scoring six goals in the tournament. That’s not what we wanted to talk about though, as looking at the James Rodriguez Futhead stats page, we can see that this player is due an insane upgrade for FIFA 15.

Take a look at his FIFA 14 stats and you’ll see that he originally shipped with a 83 default rating in the game. However, his fantastic performances for club have resulted in no fewer than four in-form cards up to an 87 rating – he could actually be the most improved player since FIFA 14 shipped. 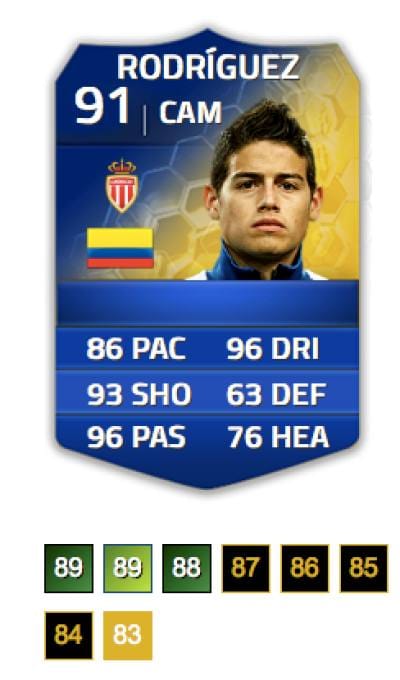 On top of that, his Colombia performances have prompted a further three more upgrades to an 89 and the icing on the cake – a stunning 91 card for being featured in the Ligue 1 Team of the Season.

It really doesn’t get better than that, amazing to think that a player has gone from an 83 all the way up to a 91 in one season. With this in mind, EA are certainly going to reveal a James Rodriguez FIFA 15 upgrade, the only question is by how much.

We wouldn’t be surprised if his new FIFA 15 rating was anywhere between 88-90. It’s a fairly big jump up we agree, but then you can clearly see that EA are not afraid of providing massive upgrades if the player warrants it in reality.

There’s plenty of James Rodriguez transfer speculation linking the player to another club such as Real Madrid too, so it will be interesting to see what happens with the player and if he can maintain his level. If you have been following this player on FIFA 14, let us know your thoughts on his upgrade potential for FIFA 15.

Do you agree that this is the one player that can warrant a massive upgrade close to a 90 rating from 83?