We already reported on the sad news that Jaguar is to end production of the XK and currently has no plans to replace the model. However, we do know that this will give them more time to concentrate on the production of the Jaguar XE, which goes on sale during the summer of 2015.

While the Jaguar XE may still be in the development stage this gives us a great opportunity to see some spy shots, with the latest from its winter testing. You will notice from the images that the British car manufacturer has gone for a different design with the saloon, as it takes on a fastback appearance.

The latest Jaguar XE pictures also tell us something else about its design, and that is how its rear deck is shorter than other vehicles in its class, along with its nicely proportioned rear screen. 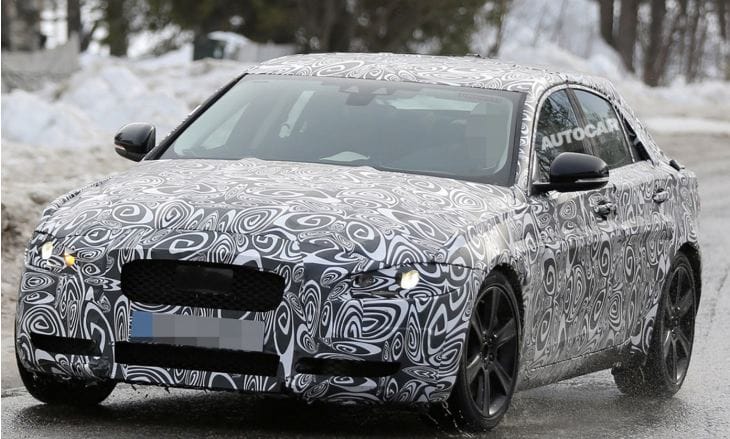 The moment this model is released to the public we will start to see a multitude of Jaguar XE vs. BMW 3-series comparison videos and reviews, although this hasn’t stopped Autocar from comparing the two vehicles based on the latest spy shots.

Jaguar are taking a huge risk with the XE because it needs to be something special in order to take the fight to the BMW 3-series, but looking at the exterior photos so far, along with what we currently know about some of its technology, it looks to be a great contender.

The driving dynamics of the Jaguar XE are said to be truly amazing, which is thanks to features such as aluminium monocoque for weight saving and improved handling, which is also helped by the all-new suspension set-up. Jaguar believe that the XE will be able to out-handle the 3-series.

As for engine, the Jaguar XE will be powered by JLR’s new four-cylinder engine, which only produces less than 100g/km of CO2 emissions, yet will still be able to achieve 186 mph.

We ask that you take a look at the images and tell us what you think so far.