Every so often Apple refresh its line of iMac, MacBook Air, MacBook Pro and Mac Mini mini models to give consumers a reason to upgrade and stay competitive with top-end Windows offerings. Usually prices stay the same but specifications improve due to decreases in component cost and advances in technology – however there is something which is delaying the next Apple offerings, this is Intel’s Ivy Bridge platform.

Every current-gen iMac, MacBook Air, MacBook Pro and Mac mini model available from the Apple store utilizes one of Intel’s second-generation Core processors (aka Sandy Bridge), this platform will be superseded by the Ivy Bridge platform and it makes no sense to release any new Apple desktop / MacBook models until Intel launch this new platform – we’ve now heard (from SlashGear) that Ivy Bridge chips won’t ship until June.

The new delay was confirmed by Sean Maloney (Intel’s vice-president and chairman of Intel China), he didn’t have a lot to say on the matter but suggested that the delay was not due to lack of demand, instead it was related to the manufacturing process which is undertaken when manufacturing these new smaller chips.

This has a direct affect on Apple’s 2012 release plans as Apple will want to give its next-gen products all the benefits which the Ivy Bridge platform brings (mainly lower power consumption and more processing power). In 2011 Apple refreshed its MacBook Pro (February 24), iMac (May 3), MacBook Air (July 20) and Mac mini (July 20) models with Sandy Bridge processors, therefore we half expected a similar release pattern this year, however now Apple has to wait longer than expected for Ivy Bridge processors to ship before they can manufacturer products which utilize them developers will have to optimize software and firmware to get the most out of the new platform.

Putting an exact date on Apple’s 2012 refreshes is impossible, however it will be worth the wait as Intel’s new 22nm process and 3D Tri-Gate transistors should ensure that next-gen models have processors which perform 37% faster than their predecessors whilst consuming up to 50% less power. 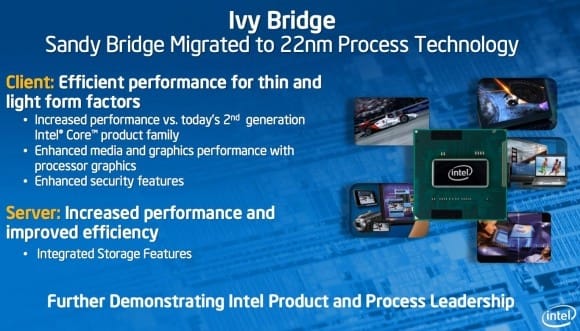 If you check out our previous article you can see a full spec sheet listing all the Core i3, Core i5 and Core i7 Ivy Bridge processor offerings which we know about so far. It’s worth noting that the i3 options don’t boast the advanced Intel technologies or PCIe 3.0 support which the more expensive chips will offer, so take this into consideration if you plan on buying a system or building a PC with a Core i3 Ivy Bridge CPU.

Will you wait for an Ivy Bridge Mac, rather than but one within the next few months?