We have a heads-up for Destiny players now, as the Iron Banner start time for June 30 is almost upon us. Bungie has sent out word to let everyone know that this time, there’s a special prize on offer.

Specifically, the main Iron Banner weapons reward is the Skorri’s Revenge Legendary Pulse rifle – which is actually the very first time that Bungie is letting players win this weapon.

Skorri’s Revenge has been made available since House of Wolves, but now players can earn it for the first time. The official description of the weapon reads “A burst-fire weapon, forged in fire by the Lords of the Iron Banner.” 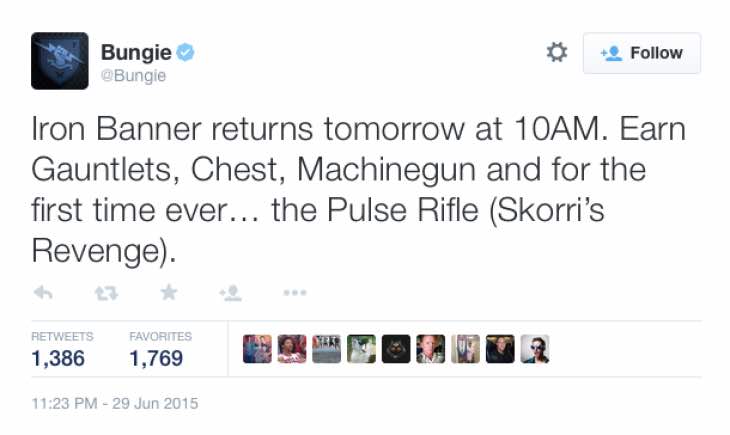 It comes with the special abilities Ascend as well as Spray and Pray when upgraded to Column 6 – You can see a full list of Skorri’s Revenge perks here thanks to Planet Destiny.

The important thing you need to know is that the Iron Banner start time for US is 10am Pacific Time on June 30. That means those on Eastern Time can start competing for Skorri’s Revenge at 1PM, while those in the UK will need to wait until 6PM.

There are very little details available on Skorri’s Revenge as of now, so leave your thoughts below on this new pulse rifle and if you think you have a good chance of getting one from Iron Banner.