After all of the delays so far for Apple’s new 5th generation iPod Touch, we’re pleased to say that it now looks like Apple are ready to ship units to those that pre-ordered at the first opportunity.

If you head to the Apple Store now and try to order an iPod Touch 5G from the US store, you’ll be greeted with a rather disappointing ship date of ‘October’, with Apple unable to give a solid release date due to high demand.

However, we’ve now heard that Apple has begun to send out shipping notifications to customers who ordered one on September 14, with an updated status of ‘preparing for shipment’ and Apple starting to take money from credit card orders as well. It goes without saying though that this only applies to those that ordered straight away after Apple’s iPhone 5 event. 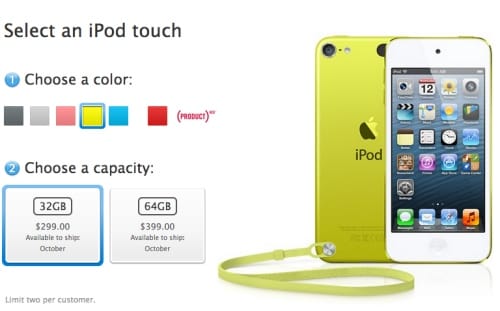 If you have only just ordered an iPod Touch 5G recently, then you should expect to wait a lot longer for shipments to arrive, with Apple now changing the October estimation to ‘three weeks’ in some cases. Considering that this is a regular practice for the likes of the iPhone 5 and MacBook products – iPod Touch buyers should really be used to the way Apple manages their shipments with each product release.

We are very surprised though in the sheer demand for the new 5th generation iPod Touch. The fact that it’s available in multiple colors and includes the same 4-inch display as the iPhone 5 really seems to have pushed consumers into a purchase and perhaps those who have already bought one did not expect to see the same shipping delays as we’d usually get with the new iPhone.

Did you order an iPod Touch 5G on September 14? If you did, let us know if you have now started to receive shipping dates from Apple via email.