Apple might have skipped a year with launching a new iPod touch, but the 5th generation model has finally arrived at a recent event and it seems that shipping notices are starting to arrive as well. Exactly one week today we reported that the iPod touch 5G still lacked a release date, and then 4 days ago we noticed that Apple were getting the new media player ready for shipment, so as expected we’re now hearing that these devices are leaving Apple on their way to customers.

The first iPod touch 5G pre-orders that saw a status change had been ordered around Sept 14, although this had only been a notice of the device “preparing for shipment” at the time, and today we know that many orders are seeing the iPod touch 5G being given a shipping and delivery date. Devices ordered a few days later than the earlier report are now seeing emails stating “one of your items has shipped“, which is a standard message Apple send out for all shipping notifications.

The shipping notices we have seen are for a range of models, which includes the 32GB iPod touch 5G in White and Silver. Most of the delivery dates we’ve seen are for around Oct 15, although if you’ve received a different date we’d love to know, so hit the comments if that’s you. 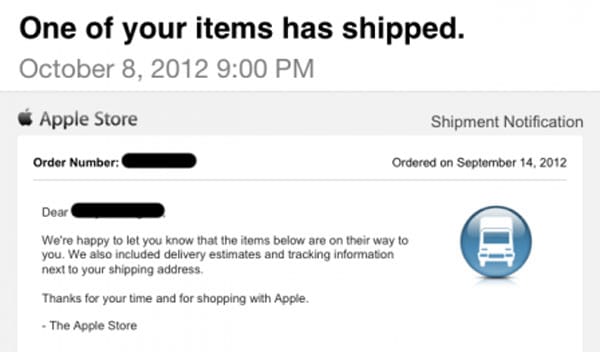 The notifications also included the new 7th generation iPod nano that will arrive in-hands within the next week, although it’s worth noting that these products are coming directly from China, so you can expect to be one of the first in the world to get hands-on with the iPod touch 5G or nano 7G. Some people looked into the delivery companies a little more and found out that the devices are coming from specific factories in China, which included Kunshan.

Apple has delivered one of the most radical refreshes of the iPod touch to date, and the 5th generation device will feature a display very similar to that on the iPhone 5, which means a screen of 4-inches that is notably taller. Considering that both the iPhone 5 and iPod touch 5G include the same taller Retina display, you should expect some shortages if you’re trying to get hold of one in the next couple of weeks.

Did you pre-order the iPod touch 5G, and if so is it on the way to you now? We’ll update PR readers over the next week, and especially after users give their reactions to the new hardware. When we hear about problems with the iPod touch 5G in the next few weeks it is always good to remember the percentage of issues, which is what Apple consider to see if problems are an expected number from overall sales.