There’s nothing like a case for an upcoming Apple product to reveal any changes to the design, and this is just what we have here for the 5th generation iPod touch, which wouldn’t be the first time a case manufacturer from China leaks solid details on a future Apple product. In the last couple of weeks we’ve seen cases for both the new iPhone and mini iPad leak, and it seems like these latest photos match up with what we’ve been hearing about the new iPod touch 5G.

The new cases hint at some design changes on the rear of the iPod touch 5G, and there seems to be a very noticeable change with the tapered edges when compared to the last generation. There’s going to be some major improvements to specs and increased memory, storage, and CPU are expected but we also see hints where the hole is for a camera.

It looks like the 5G iPod touch will feature an LED flash to help when taking photos in low light, and in the image below you can see a new hole on the left side near the bottom, although this is not expected to be for a rear microphone as on the iPad mini. This new hole is much bigger and certainly more rounded, which could hint at a bigger speaker/microphone placement. The images come to us thanks to this source, and we’d love to know what you think this new hole is for? 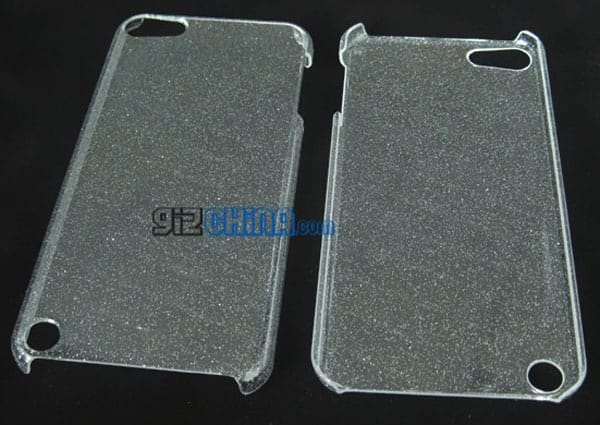 Are you looking forward to a significant redesign on the new iPod touch 5G? We’d also love to know what specs need to make the final device for you to purchase one, which in our opinion needs to include an option for 128GB and we know there are plenty of other users that want more storage. Let’s just hope Apple don’t push iCloud on us too much by not delivering the bigger storage. You might want to read about similarities between the iPod touch and iPhone in an earlier article, and what it could mean for the future of both these product lines.