Four days before Apple’s September 1 event we posted some information on the new iPod touch 4G and asked why should you upgrade? Now that the event has passed we’ve seen one of the biggest iPod revamps from Apple.

Today I wanted to focus on some key features that the new iPod touch has that change everything. The 3G iPod touch was a best seller for Apple, and this was thanks to the touch being almost everything that the iPhone was, but the gap between the devices has closed once again.

The 4G iPod features FaceTime, and this feature is possible thanks to forward and rear facing cameras. This feature is great for children and teens, parents cannot afford to give their children large budget call plans, especially in these bad economic times. This is possible thanks to using Wi-Fi networks instead of calling plans, and with wireless almost everywhere today it’s possible to make a video call from an iPod touch to another touch or iPhone for free. 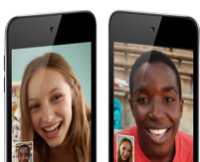 Both cameras can be used during FaceTime calls, although the front camera is perfectly tuned for FaceTime video calls and the rear camera can be used to show your surroundings, switching between them is done with a simple tap.

If video calling is not your thing, and you love to watch movies or play games on an iPod touch, then you may be impressed by the Retina display on iPod touch 4G. Those that have a good eye for detail will enjoy the pixel density on the new display, which helps books look more clear, and gives iOS apps a whole new life.

Movies are still on the small screen — some people will not like this — but the Retina display makes movies look clearer, which is helped by the same screen having four times the number of pixels.

The cameras do more than just take photos or help with video calls; you can also use the built-in HD video camera. Perfect for those that want to create home movies, or quick holiday snaps from the pocket in stunning high definition. The video looks good in both low-light and bright settings, and built-in editing is a nice touch for those with a creative side.

Some users only play apps on their iPod Touch, and this is where the new horsepower and display comes in handy. The Retina display gives you a clearer image, and the new A4 chip in iPod 4G brings the device inline with iPad and iPhone. Allowing for more advanced gaming with unbelievable graphics on a portable device, the new Unreal Technology is perfect at showing this improvement. Add “Game Center” to the mix, and you have an amazing social gaming device as well.

So with these new features the new device is more an evolution than just an upgrade. Four days before the Apple event we knew a new iPod touch was coming, but Apple delivered much more than expected. It’s now clear that upgrading to the new iPod touch is just a point of cost (from $229).

One question comes to mind with the new iPod touch, and this is how close its feature set is to the iPhone 4. Is this a good plan by Apple?