Watching TV will never be the same again thanks to the various different TV services that are available like BBC iPlayer and 4OD. They allow users to catch up with programs that they may have missed at a more convenient time, meaning they can do more productive activities during the day. The creator of iPlayer has now launched a new service called Zeebox which adds a social element to TV viewing like never before.

Anthony Rose the man behind the Zeebox has come up with a service that makes solitary viewing a thing of the past. Zeebox comes in the form of a free app for the iPad, which at first looks like a regular EPG, giving users the schedule for what’s on and what’s on next for different channels including Virgin Media, some premium Sky channels and the Freeview ones.

As TechRadar explains the Zeebox app is much more than just an EPG however. The most interesting feature, and the part of the service that is most significant, is the Facebook functions it has. By connecting the service to the user’s account their Facebook friends can not only see what they are watching but they can also see what their friends are watching and can invite them to watch with them as if they were in the room with them. You can also hide from them or instant message them too.

Those users that own a Smart TV can also take advantage of using the iPad with the app as a remote controller for their TV. The app also has Twitter features and compatibility. Head on over to TechRadar for more details on this revolutionary way of socializing and watching TV at the same time. What do you think of this service? Is it something you would consider using in the future? 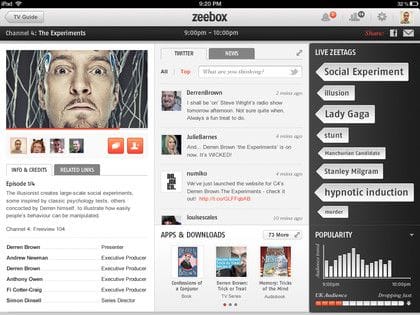