There are a lot of frustrated iPhone X owners there, due to the fact that in 2018 they just have one wish – for Apple to bring back a way to show the battery percentage on the iPhone X!

As funny as that may sound, you’ll be amazed at how much demand there is for Apple to show this information directly on the screen which obviously isn’t possible at the moment due to the new notch.

For those that don’t know know how to show the battery percentage on the iPhone X however, all you need to do is swipe down on the top right hand side of your iPhone X and you’ll be able to display the percentage that way – a very easy solution.

Are you a perfectionist though and want Apple to find a way to show the percentage without you having to swipe? We wanted to remind you of Apple’s plans to release a new iPhone X update in ‘early 2018’ which could give you your wish. 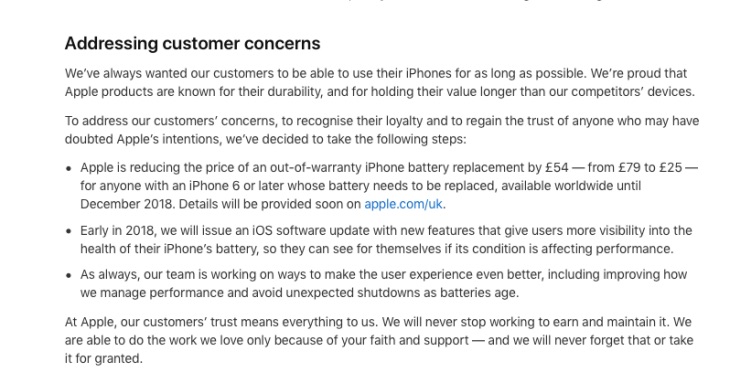 The image above is part of a statement that Apple released in December 2017, addressing concerns about battery life on iPhone devices and you can see that an update is planned in the coming weeks that will give users more ‘visibility’ to show the health of battery life.

This sounds to us like it could be related to the percentage feature that many of you are after, so hopefully this will be the case.

Let us know your thoughts on this. Would you like it to return, or do you have no problems swiping down to access the same information?