We have an interesting report for you to read now, as it has been revealed that iPhone owners are much more ‘loyal’ than Android users, according to results of a new study which were released this week.

As Apple Insider reports, a study has been carried out by the GfK Group, a well-known German Market Research team, in which 2,653 users from various countries were asked the question ‘would you keep the same operating system for your next phone’.

According to the survey, only 28 percent of Android owners said that they were willing to stick with Android for next phone, but the results were double for iPhone owners, as 59 percent said that they would be sticking with iOS as their choice of operating system.

You can see the chart below, courtesy of Apple Insider. What are your thoughts on the results? As an iPhone or Android user, would you be willing to stick with your device, or do you want to try something fresh? 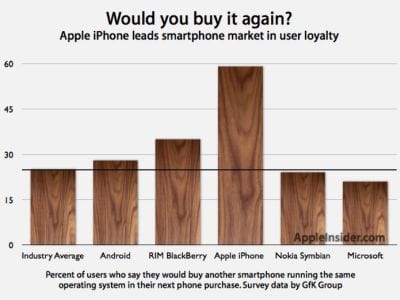