Back in April we were sent the MPro150 Pocket Projector from 3M, but since then it has been hidden away in a drawer somewhere, I am not saying that it is a bad product; its just something I do not need to use. However, this would be a different story if I had the Microvision SHOWWX+, as I would be able to view the video content on my iPhone by just connecting both devices with a small cable.

This is the second-generation model and offers a display that is 50 percent brighter than the old model, and the size of the device has not changed. The SHOWWX+ can connect to your iPhone to show your Netflix movies, as well as photos that you have taken. 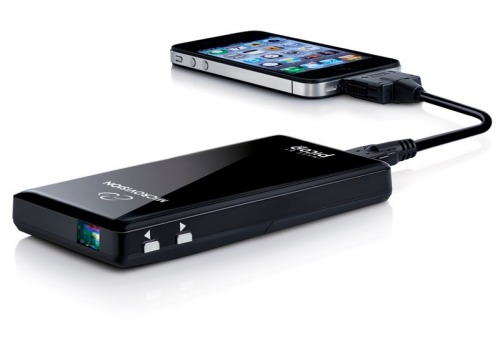 Its not all about the iPhone though, you can connect it to any media device, such as a laptop, PC or even a games console, just as long as you have the correct lead. You can see on the video on Engadget that a couple of guys have done just that, and they certainly seem impressed.

Some of the main specs include Infinite Focus, Wide Field of View, Plug & Play, Wide Screen Resolution, Thin & Light and much more. The device is also compatible with most of your iPod, iPhone and iPad apps.

For more details visit Microvision. Would you purchase one of these projector devices for use with your iOS device?