We are pretty certain that Apple will unveil a new smartphone this summer, however at the moment we are unsure as to whether they will release a high-end iPhone 5 or whether they will launch a mid-low-end device which would give Apple a bigger share of the smartphone market, today we have some concept iPhone Nano renders to show you which could resemble what this device will look like.

According to a recent New York Times article Apple will not release an iPhone Nano, however Apple are well-known for being extremely secretive about their product releases, therefore don’t rule out an iPhone Nano just yet.

Below we have embedded the concept iPhone Nano images, according to SlashGear this device is called the iPhone 4K and the K stands for its slide-out QWERTY keyboard, also it will feature a 3.2-inch retina display (800 x 400 resolution), an 800MHz processor and a 5 megapixel camera, which would be a great if the price retailed for the rumored $200 contract-free price, this would undoubtedly compete with a lot of mid-end Android smartphones. 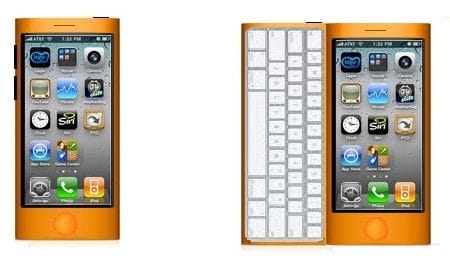 Obviously as this is just a concept we mustn’t take it too seriously, however how would you feel if this year’s iPhone release looked like the image above and featured the specs aforementioned?

If you think that you are a bit of a whizz with Photoshop feel free to email me your iPhone 5 / iPhone Nano concept images along with your own spec listing, if it is up to standard I will post an article featuring your concept.

What do you want to see Apple release this summer?