Rumors of the iPhone and iPad supporting Flash never seems to go away, but what are the chances of it ever happening? If you were to listen to Steve Jobs, then we will never see it, but we know how he has gone back on things he said. There could be one thing that would force Apple’s hand and cave into pressure, and that is Android.

An interesting article on ZDNet suggests that within a year we will see Flash Player support on the iPad and iPhone, as this is the year that Android steps things up a gear and will threaten the iPad market. Just over the past few days we have seen a host of Android based tablets unveiled at MWC 2011, which you can read more details in a previous post of ours.

Currently both the iPad and iPhone only support HTML5, and has been like that from the start, as Jobs said that Flash is too buggy. We have to agree with him on that, but what if Adobe improved the player — surely it would be better to give iOS users a way to get rid of those blank boxes that appear on a number of websites? 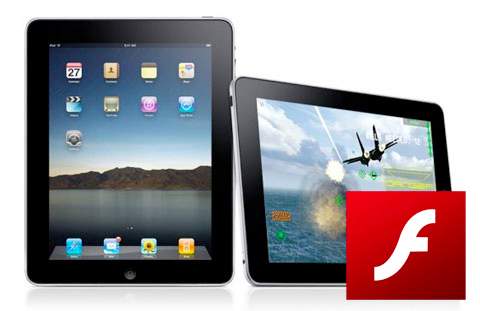 Apple thought that more websites would support HTML5 in 2011, but we have yet to hear any news on that just yet. Why is it taking these websites so long? There have been a huge amount of rumors regarding the new iPad 2, such as eCanada Now, who reports that the 2nd-generation iPad will offer Flash Player support. This is one of those that is out there, but maybe we could see it in the 3rd-generation Apple tablet?

Do you believe that Steve Jobs will ever relent and offer iOS devices with Flash? Maybe things will be different now that Tim Took is running the show?