There are a number of new features for the new iPhone and iOS 5, one concept is for voice control in the next release, but how good will it be? Voice recognition is something that is big on the list of features for Apple’s upcoming mobile OS, but how will the company be able to implement it in a useful way?

Thankfully, Macstories has done some digging and have found a video demo of just how such a feature would work. The concept is very clever, and shows the true potential of just how it could work on the iPhone 5 or even 4S. Sorry, we still have no idea as to when the new device will be released, or even its name.

The new version of voice recognition for iOS5 will be used to a greater potential than we first thought. The first thing you can see from the video is how you could navigate the user interface, which is activated the same way as now by holding the Home button down. However, that is where the similarity ends. 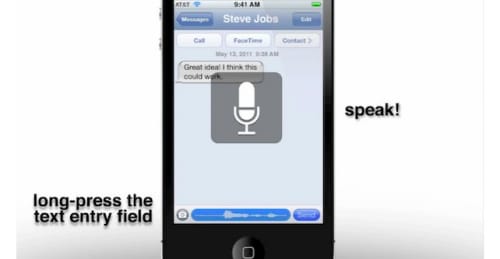 One of the better features — one that we have been waiting for — is dictation with SMS. This means that if you are sent a text message you can highlight the text and a voice will then be speaking it to you. There are apps out there for this, but it is always better having it as a main feature of a mobile OS.

This will also come in handy if you have taken a load of notes down, it will be much easier to go over them as they are being spoken to you. There are two third-party apps that will also benefit from such a feature, Facebook and Twitter. Although not certain if you want your iPhone to read out some of what is written on these two social media websites.