We’ve been using the iOS 5.0 beta for a few weeks now on our iPhone, iPad 2 and Apple TV. Just over 7-hours ago Apple informed us by email that the iOS 5 beta 2 download went live, and this also includes Xcode 4.2 with iOS 5 SDK beta 2, which we’re in the process of downloading so we can test for a future article.

You may remember our hands-on with iPad mirroring using the iOS 5 developer beta and Real Racing 2 HD, which showed great promise although lag was a slight issue. We expect this feature to improve when the public release is made available, and apps are created with this feature in mind. Developers can now test the improvements on iPhone’s running iOS 5 beta 2, which include Game Center APIs, better Twitter integration, GLKit, Core Image, the Newsstand Kit for subscriptions and magazines, and the vast potential of iCloud Storage.

There will be a lot to take in with the new beta 2, which also includes iTunes 10.5 beta 2. Developers can look in their control panel for the full iOS 5 beta 2 release notes, which tracks changes from the first release and also what’s new in beta 2. These include new additions and fixes for graphics in the GLKit framework, and new improvements in iCloud backup and storage, iMessage, MMS and a lot more. 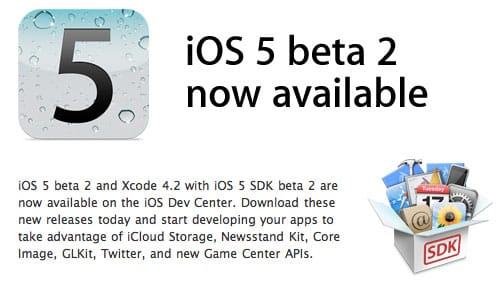 You will need to be aware that the version of iTunes that is included in beta 2 will not sync iOS beta 1 devices, although you can avoid this problem. Full instructions are in the release notes.

Another major improvement in iOS 5 is WiFi Syncing, and in iOS 5.0 beta 2 you can enable this feature when you connect your device via a USB cable to iTunes. You will need OS X 10.6.8 or Lion and iTunes 10.5 beta 2, and if you want to manually start a wireless sync this can be done via Settings -> General -> iTunes Sync.

One point that is repeated throughout the new release notes is updating to the latest versions, this includes iOS Simulator in Xcode and beta 2 not being compatible with previous versions of the iCloud Developer Seed. So remember to update everything before starting with any new release.

We’ll post more details as we get them, and if you’re a dev and have used iOS 5 beta 2, feel free to post your first impressions on any notable changes.