We have some good news for those of you looking for the exact release date for Apple’s upcoming iPhone iOS 4.1 update, as some fresh details on the Apple website have seemingly pinpointed a date for you.

As reported from Engadget, a release date has not been confirmed for US consumers, but over on the Apple UK website, you’ll see that Apple has stated that iOS 4.1 will be available on Wednesday September 8th – a screenshot below confirms this. 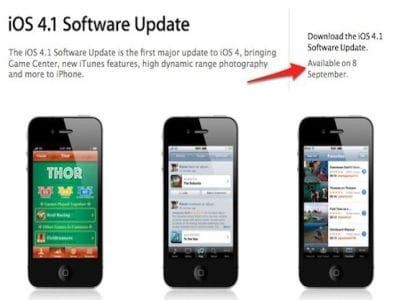 Engadget think that iOS 4.1 will also be available on that date in the US – and we have to agree with them. When was the last time that an iPhone OS came out in the UK, before US – simply not possible. Apple may even update their store with the September 8th date in a few hours time.

Apple stated that the new iPod Touch 4 would also be available next week, although again they failed to state an exact shipping date. On their store, the new iPod Touch is listed as ‘shipping next week’, so could they be arriving on the same September 8th date? – We hope so.

Let us know your thoughts on this. More details on iOS 4.1 here.