With talk about car manufacturers open to the iPhone integration idea it seems vehicle makers are to offer the iPhone platform which allows users to play music from iTunes, Spotify and other services with the use of Siri. The opportunity to access music from your handheld library is ideal for those who would rather listen to music of their choice at ease, but could this make journeys more unsafe and distracting?

The Apple CarPlay idea is discussed on CNN Money and follows the recently announced partnership between Apple and multiple major automakers yesterday, as this intends to combine the iPhone with in-car entertainment systems. The CarPlay setup involves a console touchscreen as well as steering wheel button that active Siri, and with Apple’s voice command system drivers can make calls, hear and dictate text messages, not to mention the option to listen to voicemails and get directions.

According to reports the first cars to have this feature will debut later this year, with the likes of Ferrari, Mercedes-Benz and Volvo along with future manufacturers adding to the list such as Ford, Toyota, Honda, GM and BMW. While some car makers feel this is a safer way to use your iPhone in the car, others give us the impression this could transform the in-car experience.

The system is currently compatible with the iPhone 5, 5c and 5s, and this will be expected to push the integration of smartphone technology into cars, as Greg Joswiak, from Apple says this will “let drivers use their iPhone in the car with minimized distraction.”

With that in mind, mobile phone use in cars has been a leading contributor to driving accidents caused by distraction and reports suggest that 3,328 people were killed in 2012 because of this, while many states have imposed laws in a bid to prevent the use of cell phones in cars. 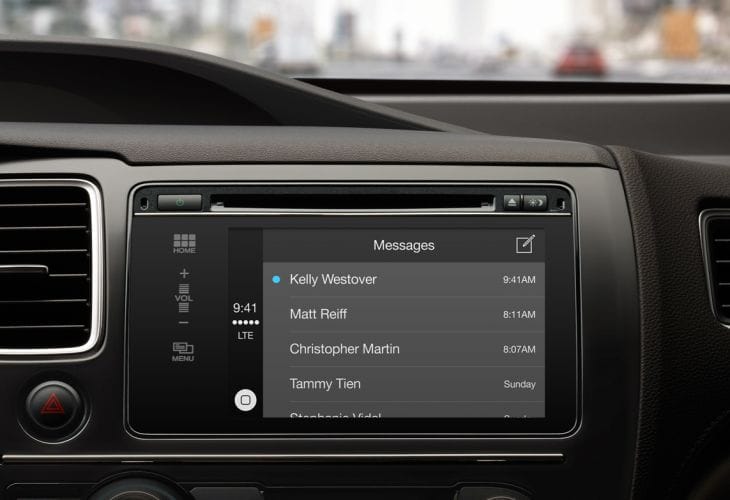 We understand that the use of a cell phone is distracting for drivers who need to keep their eyes on the road as well as their hands on the wheel, but even hands-free kits are still said to increase the chance of an accident according to the National Safety Council.

They feel that a form of inattention blindness occurs, which in turn makes it difficult for drivers to keep track of their surroundings and multitasking can affect those identifying potential hazards, not to mention their reaction times. Therefore, we are interested to know whether this idea will cut down the amount of accidents on the road, or reduce them.