We have informed you of various new apps recently, these include Quickoffice, Infinity Blade, and Battlefield: Bad Company 2. Now we are notifying you of another great game from EA; Need for Speed Hot Pursuit.

The game was released onto the store along with many EA titles and it currently sits in 2nd place for the Top Paid app, 4th for Top Grossing. These high rankings prove just how good the game is. Need for Speed currently has a higher rating than any of the apps above it within the Top Paid and Top Grossing parts of the store. 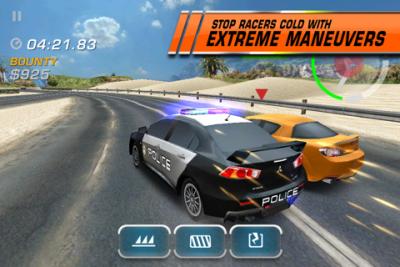 In the game, you play as a police car and are hunting down racers around the courses. There are a few different modes for you to choose from, you can play Takedown, where you have to stop racers using high powered cars like Lamborghini’s. You can play a police career mode, where you start as a Rookie and work your way up. There are 24 cop career events allowing you to progress through the ranks. You have the chance to operate 15 different police cars, all extremely high powered for you to catch the racers and stop them in their tracks.

Do you want a bit more from the game? If you do and have a friend that has made the purchase too, it can be played against one another over Bluetooth or WiFi. One player plays as the police car, the other as the racer. 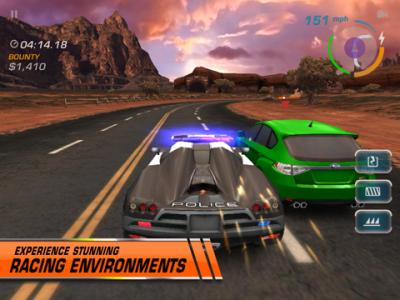 If you haven’t downloaded the game already then now is a good time, it is currently reduced to £0.59 or $0.99. The game has a version for the iPad, which you can download from the iTunes store here. It has a separate version for the iPhone and you can get it here. If you want to see some example gameplay then head to the bottom of the article.

Have you been playing the game on either the iPad or iPhone? What do you think of it? Let us know in the comments below.