Some shoppers will be looking for the iPhone 6 price in India right now due to it being a good time to purchase before the iPhone 6S release date, which is expected in around 3 months time. New buyers tend to either pickup new phone hardware at launch, or wait until a few months before a new model releases.

There’s many benefits to waiting around 9 months after the iPhone 6 and Plus released. These include cost, but also due to iOS 8.4 about to launch to public and most teething problems being fixed by this date.

In India, the price of iPhone 6 hardware right now is at Rs 44001, according to Snapdeal. This is a popular website in India and one many mobile phone buyers use to find the best deals for Apple iPhones, as well as cheaper handsets from the likes of Micromax. 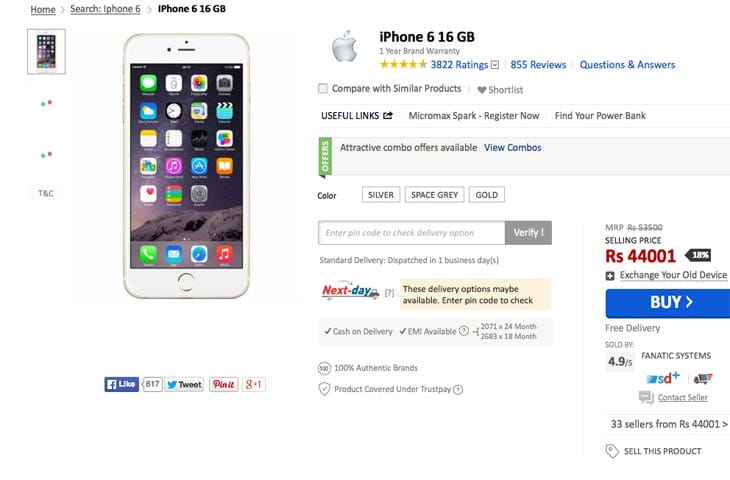 You can see the Snapdeal product page for an iPhone 6 with 16GB of storage right here, which lists the Rs 44001 price in India at the time of writing. This is apparently 18 percent less than we saw last year, so it could be a big enough discount to tempt shoppers rather than wait for a full price iPhone 6S or 7 in September.

Do you think the current iPhone 6 price in India is low enough for purchase? If not, how low would you like to see it go before you part with money? It’s worth noting the price will likely drop a lot more the closer we get to a new iPhone model in 2015.