When Apple announced two new iPhones a few weeks back we assumed that their hardware would be very similar, and they were. However, there were a few differences, one is the larger display, which as we know would require a larger battery in order to counter the extra power needed.

iPhone 6 Plus battery life compared to rivals — When compared to the smaller iPhone 6, the Plus model has a decent advantage over its sibling in battery life results. However, when put up against rival handsets, the results are not up there with other smartphones/phablets.

PhoneArena has conducted a series of tests, one of which was to look at battery life, and looking at the results, the Sony Xperia Z3, Huawei Ascend Mate 7, and even the Samsung Galaxy S5 and HTC One M8 all perform better. 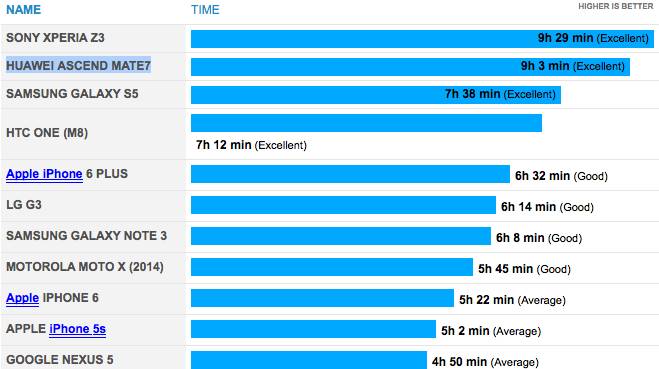 For the battery life comparison test each handset was running the same custom web-script, which PhoneArena say is designed to replicate real-life usage to get a precise figure on power consumption.

However, the Huawei Ascend Mate 7 and Sony Xperia Z3 are in a completely different league to the large iPhone 6, as they had a time of 9 hours 3 minutes and 9 hours 29 minutes respectively.

Seeing these results, do you think the larger battery of the iPhone 6 Plus has failed to deliver?

We should not be overly surprised by these result because battery has never been a priority for Apple, even if they seem to have made improvements with the iPhone 6 Plus.