The Slim Armor case by Spigen is a very popular model for various reasons, which we will get to in a moment. To prove just how popular this case is, the company already sells the one for the iPhone 6 Plus, and is now taking pre-orders for the Samsung Galaxy Note 4 Slim Armor case. Both look similar, although there are subtle differences to make them stand out against each other.

These cases are the same in terms of the protection they offer, while managing to still make the handsets look slim, and the built-in kickstand takes full advantage of the large screen, as owners are more likely to watch a TV show or Movie because they have such larger screens. 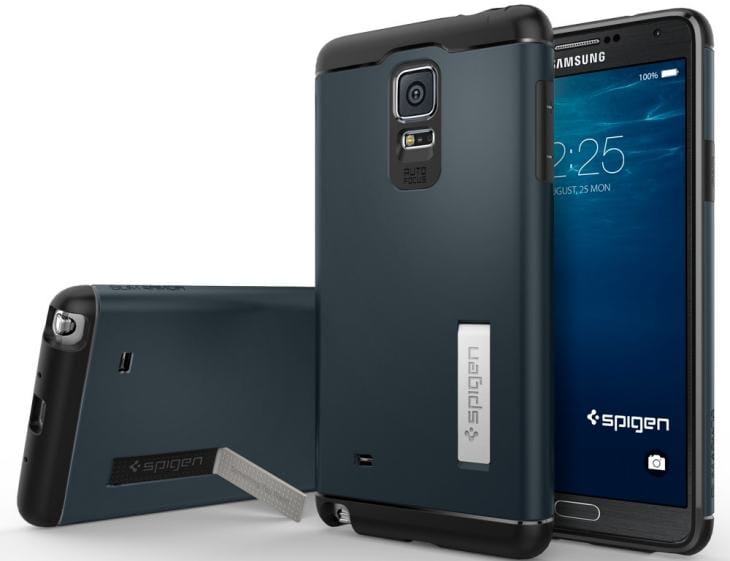 The armor on the case is double layered with a TPU and polycarbonate hard case, which adds extra protection. Buttons on both cases are flusher than previous models, which helps to improve its sleekness. There is also Air Corner technology, as many case makes found that handsets were taking the most damage on their corners.

However, there are a few differences. The iPhone 6 Plus Slim Armor case from Spigen is compatible with Beats by Dre headphones, has two more color options, and the rear of the camera has cutouts for the camera and Apple logo, which makes the case seem completely separate to the handset.

Spigen’s Galaxy Note 4 Slim Armor case is different in the way that there is no awkward cutout, and so looking at the rear of the case makes it seem as though you are looking at the back of the camera, and so the case and phablet feel as one, if you know what we mean.

If we had to choose a case going on looks alone, the then version for the upcoming Samsung Galaxy Note 4 would be the winner, although the iPhone 6 Plus case does look slimmer.