It would be expected for the new iPhone to arrive in fall this year at the start of 2013, but since then a few things have changed including the possibility of a readjustment to WWDC with a minor update in the form of iPhone 5S. This had been hinted recently with two documents offering up rumors of a much sooner release for iPhone 6.

We initially said iPhone 6 thanks to this being the expected iPhone 5 update rather than a 5S stepping stone, considering those that skipped this phone wanted a lot more than a minor 4-inch display upgrade, 4G LTE, and new software features thanks to iOS 6. If the next iPhone brings another minor change then we could see some users sticking with iOS 7 until the real iPhone 6 upgrade arrives possibility as late as 2014. 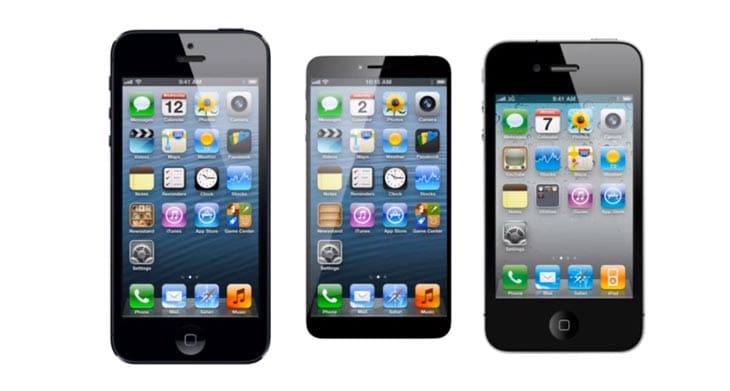 The new features have helped Apple’s iPhone 5 sell well against other devices, which now include massive Android phones such as the new Samsung Galaxy S4 and HTC One. The iPhone 5 might need to take on these two Android handsets for many months longer, unless the leaked documents mentioned above really do result in pre-orders going live on June 20th and the first generation iPhone being discontinued the day after WWDC starts.

You can see an image above with a couple of iPhone concepts along side the iPhone 5, and what some claim as an iPhone 6 or 5S. The idea could be for Apple to introduce more than one size iPhone, and while we expect this to arrive at some point it might not happen until a fully fledged iPhone 6 receives a release date next year.

The smartphone industry has changed and thousands of our readers have commented on their love for a handset that does it all, which smartphones practically do already, but the new generation want a tablet and phone in one. This isn’t for everyone, so Apple should offer more than one size if they want to gain and keep market share long-term.

iPhone 6 Release In 2014 With Supply Changes – One popular blog loves to reveal supply secrets through so-called industry sources, which of course are never named, and in another article by DT it seems that some big changes could come with an iPhone 6 in 2014, especially if we are looking at the companies supplying parts to Apple for a handset not expected to be the same as an iPhone 5S model arriving this year.

TSMC aims to help Apple satisfy the big demand for iPhone 6 by completing an ‘equipment move-in’ to a facility located in southern Taiwan. Everything should be up and running by the end of 2013, say the insider sources, which will replace Samsung’s role in creating APs for the iPhone 5 and possibility iPhone 5S expected at WWDC, according to leaks. Mass production should start in early 2014 from TSMC’s Phase 5 facility.

iPhone 6 with more carriers – At the start of this year we saw T-Mobile offer the iPhone 5, which took many years to finally happen, and U.S. Cellular recently disclosed that it would offer the iPhone on what’s likely to be their 4G network. When the iPhone 6 meets its release date in 2014 you can expect more carriers than when the iPhone 5 launched, which when paired with a likely bigger choice of screen sizes, could be the year Apple offers what some phone users wanted before jumping to Android and Samsung.

The issue for Apple, will 2014 be too late to offer the display and carrier choice wanted?