We know that Apple will unveil the iOS 8 release date at WWDC 2014, but what we are not expecting to see until later this year is the iPhone 6 announcement at WWDC 2014.

Trust some fans to get a little excited though and attempt to spoil the fun for everyone else. If you have been keeping up with the latest iPhone 6 rumors, you may have heard about one particular story that is doing the rounds right on the doorstep of Apple’s event at the Moscone Center.

This story involves an alleged iPhone 6 image that has leaked, appearing to show the elusive device behind the scenes on stage at Apple’s WWDC preparations. The image can be seen above and again in the clip below which has so far attracted almost half a million views in the space of a few days.

Unfortunately though, it looks like it has been proven to be a fake. We won’t be seeing the iPhone 6 at WWDC 2014 as eagle-eyed Reddit users have already labelled it as an elaborate photoshop job which you can see evidence of here and read about it in more detail. 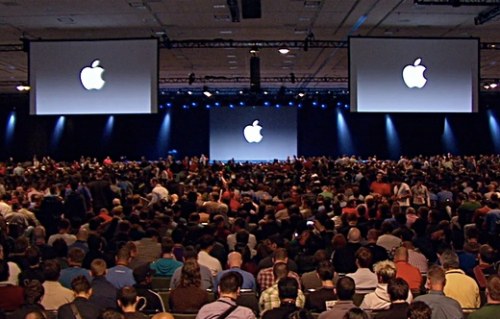 While we would all love to see an aluminum-themed iPhone 6 in a few hours, this tease is rather cruel to the millions of consumers who are still hoping that the iPhone 6 will genuinely appear on Apple’s stage when WWDC 2014 is live.

Watch the video yourself and let us know what you think of the effort that the creator has gone to in order to trick everyone. Are you surprised at the lengths in which some will go to?