The Apple iPhone 5 can be seen in the photo below and it looks beautiful, in our opinion, but reality is very different after using the latest hardware since launch. We might have owned every generation since the original although time has come for some true change, and we want to see the iPhone 5S release with some key changes.

Time for Apple to change or die a slow death – there will be an iPhone 5S release in 2013, or at the very least under another name like iPhone 6/Plus/Mini, but when the date finally arrives it will be the start of real change for Apple or the beginning of the end in my opinion.

Apple has met some real competition last year with Samsung showing they really have what it takes to hit Apple where it hurts, and we expect much of the same success in 2013 with both the Galaxy S4 and Note 3. Samsung has designed both the Galaxy S3 and Note 2 to cater to the needs of smartphone users, which allows for some people to enjoy a bigger than iPhone display on the S3 and even more screen real estate on the Note 2.

The phablet has become a big smartphone that’s designed for users that do a lot more than just make phone calls, which is certainly what the majority of teenagers do these days anyway. These people want a device that is both a tablet and smartphone, but obviously not at 7-inches plus like most tablets. The Samsung Galaxy Note and Note 2 delivered to these users, and since then we are now seeing an army of phablets releasing.

Our desire for Apple to change before it is too late – pointing out the success of Samsung doesn’t mean we are ready to jump to Android, and in fact it’s quite the contrary, which is thanks to having so much invested in iOS and Apple. Recent rumors and official patents point to Apple planning change, even if it is taking them a while, so we do expect more than one screen option for the iPhone 5S / 6, or at least something bigger arriving.

Features the iPhone 5S, or 6, must not release with – in our opinion there are a few features we’d hate to see included with the 7th generation iPhone in 2013. I feel that these features won’t be welcomed by a number of our readers as well, or at least they won’t be at the top of wish lists.

Scratches – the aluminium feels solid and can handle knocks much better, but compared to the plastic design on other phones it scratches a lot easier. You can see a close-up of our iPhone 5 below that gained scratches much easier than any iPhone we owned before, and Apple has confirmed this especially for the Black & Slate model we own. 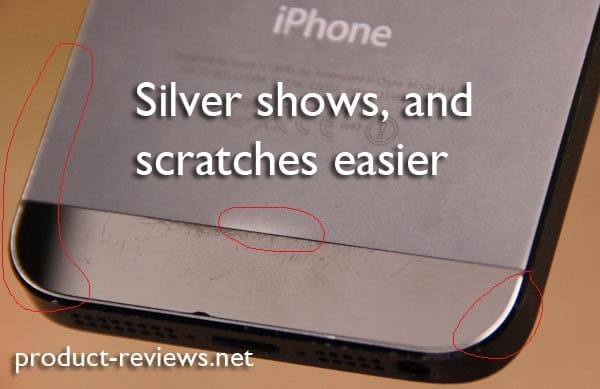 We expect scratches but not as easy as it happens with the new handset. Apple need to make the iPhone 5S/6 scratch much less with an aluminium design, or move to other materials, so the easily visible scratching is one feature we don’t want on the new phone in 2013.

Not the same old display size for iPhone 5S / 6 — as we mentioned above it seems that the size of the iPhone has not really changed much since the original, and it is time for Apple to offer a lot more in the display department when it comes to size.

It will not be easy to get the right display size moving forward, so it could be worth Apple offering more than one size option, which has already been rumored for a number of weeks and personally this had been an idea I didn’t like. If Apple release a 7th generation iPhone with roughly the same size it won’t seem like an upgrade at all, so we don’t want to see the same size again that looks skinny and not much bigger.

Built-in projector is a bad idea — if we see the iPhone 5S/6 release with a built in projector it might excite some gadget fans, but realistically it just seems like a bad idea that will produce really hot iPhones.

The iPhone 5 runs cooler than any Apple phone before it, but the handset can still get fairly hot when using 3G, GPS, or playing some videos. If Apple included a projector like some rumors suggest, then we could see some real heat problems and also it seems strange to force this option on everyone. We would rather see an official Apple accessory that users could purchase if they wanted to, so this is another feature we don’t want included by default.

Flexible display — we like the idea of bendy displays that either rollout for a really big screen, or bend around the iPhone for some options like touchscreen buttons on the side of the smartphone, but this is certainly something that is not ready to be tested on the iPhone 5S/6.

Flexible displays are coming and we saw that at CES 2013 and you can expect more of the same at MWC 2013, although this technology needs testing first on some other phones and not the iPhone or even Samsung Galaxy S4. After this tech has had some time in the marketplace then the brands could risk it with flagship smartphones, or this will almost certainly cause production problems thanks to being harder to produce.

What features will you hate to see on the Next iPhone?