When we’ve seen most smartphones compared to the Apple iPhone design in the past it is normally met with the question — how many ways can you change a smartphone anyway? Things have changed a lot since then and now there are Android phones that easily give Apple a run for its money, and the sales of Samsung’s Galaxy S3 and the niche Galaxy Note 2 are a perfect example. Some tech enthusiasts are watching what Apple does with the design of their upcoming iPhone 5S, unlikely to be named iPhone 6 just yet, although it’s widely believed that the iPhone 5S will feature an incremental design change just like we’ve seen with previous generations.

The fact that the iPhone 5 released with a bigger design change than most generations only adds to the likelihood that the 7th generation iPhone would not change as much. Apple don’t normally make too many changes with the iPhone design, so considering the recent revamp we’ll see some enhancements with specs in a device most likely titled iPhone 5S. Then when we see an iPhone 6 in 2014 it would include a much bigger design change, which had been seen before with the iPhone 4 and 4S keeping the same external design.

Apple iPhone 5S release date — most people think that the product cycle would be a year, and sometimes longer, but there’s a good chance for the iPhone 5S to launch at WWDC 2013 considering the crowded fall lineup including a number of Apple products already. The iPhone needs room for its launch, especially considering it is Apple’s most popular device, so bringing the phone back to WWDC would be a good move in our opinion. We touched on this possibility a couple of months ago, although would you like to see the next iPhone launch at WWDC rather than the end of 2013? It is also worth pointing out that Apple launched the iPad 3 and 4 within 7 months of each other. 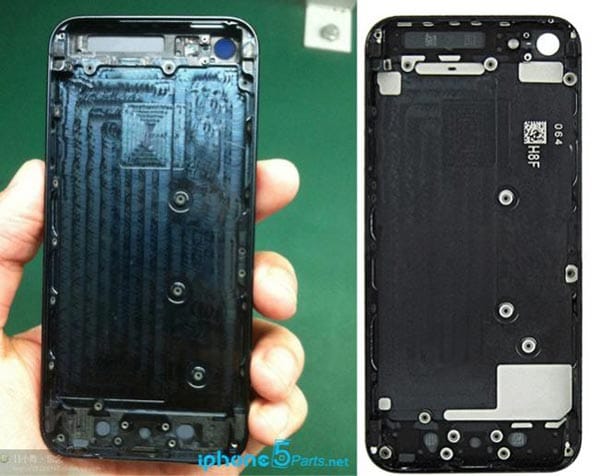 The rear housing for iPhone 5S leaked – we’ve included a photo of what could be the iPhone 5S rear housing above that had been featured in a forum post at the start of this month. You can see more photos here, which if true show that the external design would pretty much stay the same.

What small changes should take place with the iPhone 5S design? Considering the scratches plaguing the iPhone 5S Black & Slate model, see a photo in this article, we need to see something improved here to stop the aluminum showing so easy on that model. Feel free to share what you’d like to see change in the next iPhone, and also see a video below showing all generations side-by-side to date.