With all the iPhone 5 rumors that we have heard about so far, this has got to be amongst the most exciting yet as we have news of a concept design courtesy of Concept-Phones, which adds a splash of color to the notorious black or white design for the iPhone we have seen until now. Though it is highly unlikely the final product would actually receive a makeover like this, there is no denying that these devices look very smart indeed.

The man behind these concepts is Antoine Brieux, who has produced concepts in the past that have got the imagination going crazy, just as his must be to produce such quality designs. Amongst his work is the likes of the HTC Tube Tablet, which combines a smartphone and a tablet together and the HTC Tube which seemingly integrates all the devices you’d need into one device.

The designer has also produced an alternative iPhone 5 concept that keeps with the traditional color, more likely what Apple will go with for their final product. Despite the tradition with the iPhone colors Apple have dabbled with color in one of their other devices before, like the iPod, so the use of color on another device such as the iPhone doesn’t seem too unrealistic. 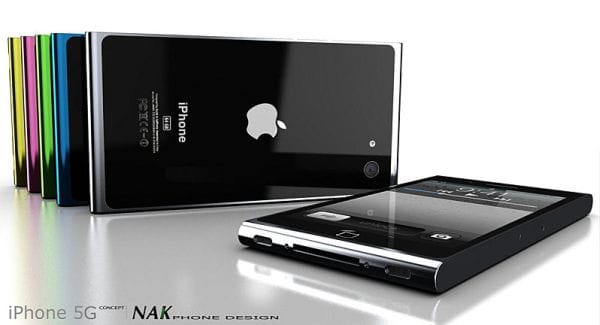 If you have a look at the colorful iPhone 5G concepts above you will notice a slight resemblance to a design that is actually being produced at the moment by none other than Nokia with their N9, a MeeGo OS smartphone that also comes in several vibrant colors. Though the looks of a device do not affect performance I personally do not see the harm in providing a color choice, if anything it makes them look slightly less business like which could appeal to more people, and adds an element of personality to an otherwise dull looking device.

As for the rest of the design from Brieux, the layout of his iPhone 5G is pretty much the same as the iPhones we’ve already seen. The Gorilla Glass face with black matte on the back, same home button, two speaker grills, iPod dock at the bottom, on the back a camera with LED flash, headphone jack on top, power button, screen lock and volume controls also included.

So would you buy an iPhone like this? Do you think there should be a color choice in future?