With smartphone releases such as the Galaxy Nexus and now the Samsung Galaxy S3, it’s fair to say that now has never been a better time to pick up your first Samsung handset. Recent statistics have shown the increase in demand for Samsung phones compared to previous years, although results have also proven that there is still a greater demand for Apple’s upcoming iPhone 5 handset.

We wanted to share with you some recent statistics that we received from the latest ChangeWave Research survey, which polled a select number of consumers in North America on what smartphone they were likely to purchase between the new Samsung Galaxy S3 and the unannounced, but surely inevitable iPhone 5.

Although still not on level terms of iPhone demand, a chart provided by ChangeWave shows that there has been increased demand for Samsung phones year on year. The Galaxy S3 is obviously a key factor in the surge that you see under the 19% stat for March 2012, while we’re also willing to bet that interest in the impressive Galaxy Note played a part in the increased statistics before it too. 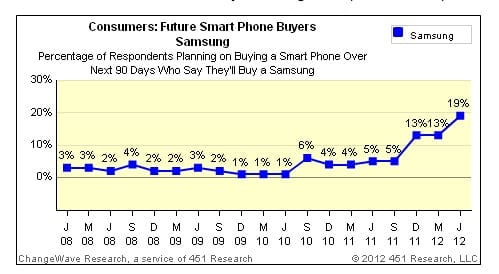 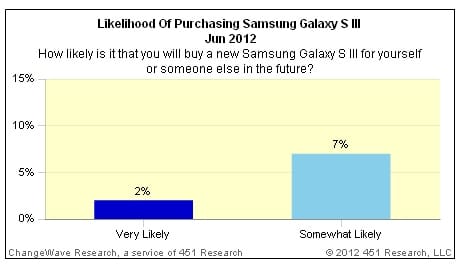 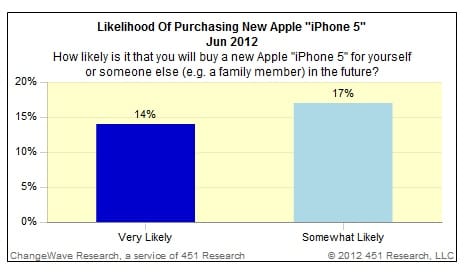 For an unreleased product, that just goes to show what kind of power Apple has over their competitors at the moment, even by staying completely silent for a year whilst letting rumors do the talking. As an Android owner though – does it encourage you that more and more users are now starting to believe that Samsung can one day overtake the iPhone as the number one smartphone in the world?

Apple are still winning this battle for the time being though, based on this survey. If you are planning to get the iPhone 5, or have already bought the Galaxy S3, let us know your thoughts on this.