Earlier on this week we gave you an update on the status of the infamous and still missing iOS 6 untethered jailbreak for the iPhone 5 and other devices. Progress has apparently been made by the underground iOS 6 developers, but now there has been a big shakeup in personnel for those working on the jailbreak, with one member hinting that an untethered jailbreak will finally be ready once Apple releases their official iOS 6.1 update.

Many impatient fans have had to endure a tedious wait for an untethered iOS 6 jailbreak, quite possibly the longest it has ever taken a new iPhone to be fully unlocked upon release. The inevitable software update was likely to come from the iPhone Dev Team or Chronic Dev Teams, but now it has been revealed that a new jailbreak team has been formed, consisting of Pod2g, MuscleNerd, Planetbeing and Pimskeks.

They are calling themselves Evad3rs and one Tweet from Pod2g suggests that they have now cracked the iOS 6 code, but are waiting on Apple’s next software update to release the jailbreak to everyone. This is likely due to the fact that if they release the jailbreak now, Apple will just patch up the new exploit with iOS 6.1, which is why they are waiting for Apple to strike first. 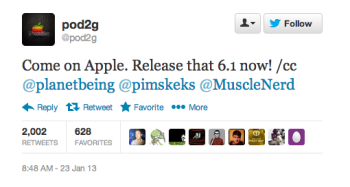 His Tweet implies that there has been some success behind the scenes and hopefully it will be the untethered jailbreak for the iPhone 5 that everyone has been holding on for. If not, why would they suddenly form a new jailbreak team? It looks like they want the world to know that the ‘Evad3rs’ team has managed to crack open iOS 6 and hopefully they’ll give interested parties the good news soon.

What are your thoughts on this new team being set up? Are you still patiently waiting for the jailbreak?