Throwing a cover over the top of an iPhone 5 and offering one up for free is a great way to attract some attention, and this is just what iSkin are doing while they promote some new fashionable accessories for the new iPhone 5. The problem is no one knows officially what the 2012 iPhone will look like, unless iSkin has a close partnership with Apple, and the accessory website is already explaining they will be ready right away.

We received an email from iSkin that explained they are getting new products ready for the iPhone 5, and these will be “innovative” and “unique“, which are sure to keep your new iPhone 5 protected from launch so it stays in pristine condition. We cannot be sure if iSkin are just guessing on the design, or waiting for the device to launch before putting the finishing touches on the new iPhone accessories.

In the image below you can see the next iPhone covered up with a cloth and given the name “iPhone 5“, although just like us we are only referring to the 6th generation iPhone by this commonly known name, but it could end up being called “New iPhone” just like Apple did with the 3rd generation iPad. Do you have a favorite name you’d like the next Apple phone to be called? 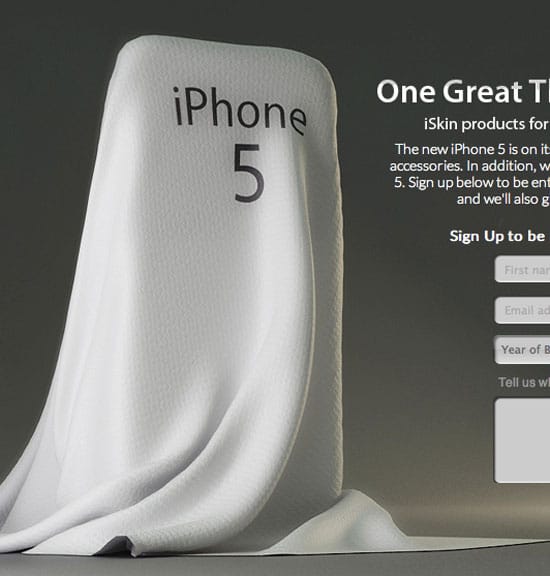 If you are happy to part with contact details then you can sign up on iSkin here, which allows them to contact you when their new skins launch for the iPhone 5, and you’ll also be entered into a competition for a free 16GB iPhone 5 or whatever is the equivalent when official details are announced. Remember to like PR on Facebook and Google+ to keep connected with the latest news as it breaks

iPhone 5 release date 9 days after event — nothing has been confirmed from Apple about the new iPhone 5, not even the event that some people believe is definitely happening, although the majority of rumors are pointing towards a couple of details that have been confirmed from a variety of sources. The measurements of the new iPhone can be seen here in multiple pictures, and the unveiling is expected at an event on Sept 12 with the release date 9 days later on the 21st.

Earlier today we heard from one of Apple’s suppliers offering up details on the production process and they explained how everything looks on target with no delays, but shortly after posting this information we heard from another source that explained the forecasted units ready for launch would be 25% less. You can read more about this here.