What a week it has been for the iPhone 5 with the amount of rumors appearing online reaching an all time high, which had been helped by Apple sending out an invitation to selected media for their Sept 12 event. The big announcement is expected to be the iPhone 5, and following the official invites we’ve seen some predictions made from respected bloggers, more leaks of the iPhone 5, along with possible accessories.

The iPhone 5 headphones — at the start of this week we managed to see what could be the Apple in-ear headphones expected to be inside the box with an iPhone 5. They feature a new design that removes the speaker grills seen with the last two generations of iPhone, and this has been replaced with a small insert.

If you’re on top of most iPhone 5 news then we’re sure the new headphone video, seen here, has been watch by yourself already. If not then head over to that page and watch the video under the article, which gives a visual look at how the redesign looks close-up. It is worth noting that this new headphone design has not been confirmed officially, so until next weeks event it’s best to take this just as a rumor. You can also see a photo of the new iPhone 5 headphones below.

Apple iPhone 5 event invitation – four days ago Apple decided time had come to send out invitations to selected news media for their upcoming event, and while this invite said very little it also left a few clues. The big number 12 had to be for the day in September, which Apple also put inside the invite with the location, but the shadow showed a different number as seen in the image below. 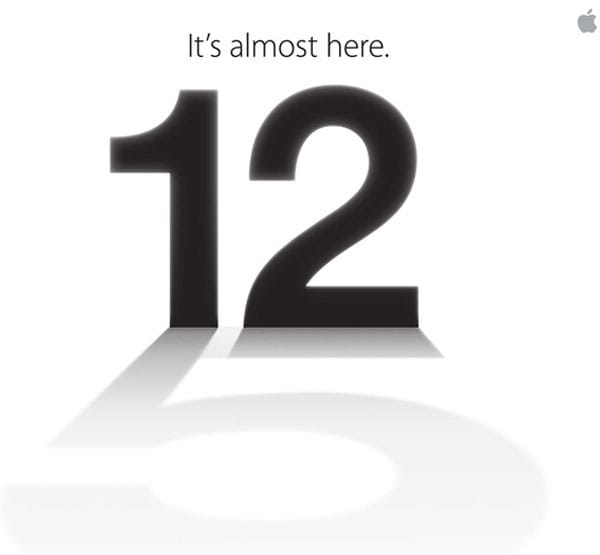 Most Apple fans jumped on the same boat as to the meaning of the number five shadow, which is the name for the next device being iPhone 5. We have used this as a common name for a while now, although to be honest we didn’t think Apple would use that name. There are a number of other thoughts on the shadow, which includes this also being a date for the release, but considering that date is different for each country it doesn’t seem likely.

The Sept 12 event will obviously be the same date in most countries, time zones aside, and this iPhone is the 6th generation, so it has to be the name and if not what else could the shadow mean?

Apple iPhone 5 predictions — when it comes to knowing every generation of iPhone from the inside out, it seems that one of the most experienced websites is iFixit, and their very own Kyle Wiens has made a few predictions for the new iPhone 5. Having been correct in the past with expectations for the iPad 3 and previous iPhones, we have to take what he says with more credibility than most blogs.

You can read a Q&A with Wiens in this article, which looks at what he thinks about the expected bigger iPhone 5 screen, battery life, backwards compatibility, and the new dock connector. It is interesting to hear Wiens talk about the new connector and the possibility of an adapter, which in his opinion won’t happen and in his own words means a lot of accessories will be sent to “landfills“.

How will you feel if Apple didn’t offer backwards compatibility with the iPhone 5, specifically for the old dock connector?