The credibility of Apple’s phone has been proven through amazing growth and sales, which considering we are talking about one phone it is a success story worth admiring. The iPhone 5 has recently been predicted to have 80 million sales lined-up already, if a certain report is to be believed, although we would expect this to be pretty spot on after looking at sales of the 4S model.

The photo above shows the iPhone 4S next to a Samsung Galaxy Note, and this illustrates how the size of the iPhone has kept pretty much the same while other smartphones are growing at each release. One reason a number of users are moving to Samsung is the bigger screen size, and this includes some iPhone users, but Apple know they need to increase the iPhone 5 display size and this is expected but only by a small amount.

The rumors of a longer iPhone 5 with about the same width have been repeated a number of times from difference sources, and the photo below shows what is claimed to be the 4S model against the upcoming iPhone 5. Even if this image is not of the final design, or any testing unit, it is certainly similar to what the iPhone 5 is expected to be in terms of size. 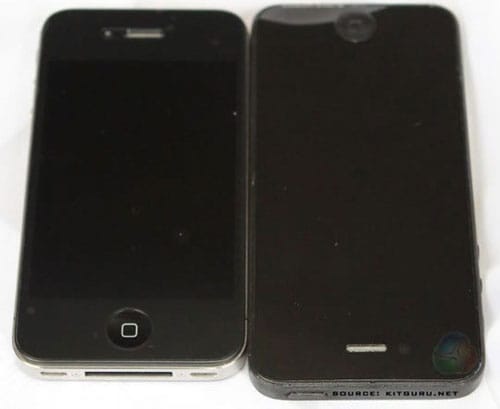 One of the iPhone features a lot of Android users poke fun at is the display size, and it’s common to hear about how small the iPhone looks and claimed to be “so 2010“, which is not due to specs but all about the size not changing to keep up with the norm in 2012. Features do need to improve each generation, although the old saying “if it ain’t broke, don’t fix it” could be right when it comes to the size of a mobile phone.

How big should a mobile phone be? The Samsung Galaxy Note 2 is expected to be bigger than the first generation, which is already sized at 5.3-inches and certainly aims for a niche. There is obviously a market for this smartphone and this is seen by the amount of people leaving positive comments, and reviews of the Galaxy Note, but would those people that state the iPhone is too small also say the Galaxy Note is too big?

What would your ideal iPhone 5 display size be? The iPhone 4S and Galaxy Note are at totally different ends of the smartphone size scale, so this comparison is ideal to see how different phone sizes can be, but is it right for the iPhone 5 to feature a display that only slightly increases in size? Watch the comparison video below that compares the iPhone 4S to the Samsung Galaxy Note, and share a comment about the differences in size.

Give me a phone on my ear, not a tablet – In our opinion a slightly wider and longer iPhone 5 would be perfect, but anything near the size of a Galaxy Note would feel more like a brick or tablet on our ear, and certainly not what we think is ideal for phones. If you want to hear the latest rumors surrounding the iPhone 5 release date, then see our article from earlier today.