You probably want to take this with a huge pinch of salt, but we have something interesting to show you now, which might, just might have revealed one of the main features of the upcoming iPhone 5, which is strongly rumored to be coming before the end of the year.

Some of you have heard of Nuance before, thats right, the company which develops voice recognition software for the iPhone and other iOS devices. Well, they have been linked to be closely working with Apple for speech recognition technology for future devices but right now they have an app that’s available to buy now on the App Store and iTunes.

And it’s this app that has turned a few heads. If you proceed to their iTunes app listing for SpeechTrans, you will notice that some of the preview screenshots appear to show an iPhone with an enlarged edge-to-edge display screen, as reported from 9To5Mac.

Yes, that 4-inch display screen spec is right back in the headlines it seems – or is it? If you take a look at the picture, you’ll also see the home button crammed right next to the bottom of the display screen, leading many to suggest that this could be a photoshop, or just some kind of error on Nuance’s part, the developers of the app. 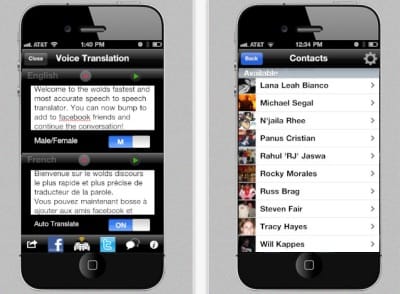 Could they have possibly outed the strongest indication yet that the iPhone 5 will be equipped with a larger edge-to-edge display, or is this image inconclusive in your opinion? Take a look at the images over at iTunes for yourself and give us your thoughts on this. Is this worthy of your excitement or not?